You'd think the new Argosy was bad enough from my description of last week's issue, but I forgot to mention almost the most annoying thing about the new format. One thing Argosy had over slicks like Collier's, as far as I'm concerned at least, was that Argosy didn't jump stories. In Collier's or The Saturday Evening Post you'd read the first two or three pages of a story and then you had to jump to some page toward the back of the book. I like to read a magazine from cover to cover without jumping back and forth, so that practice -- which you see in plenty of pulps, including one story in the Dime Western I scanned last week -- really bugs me. Now, as of the transformation of January 18, Argosy was doing the same thing. The really lame thing about it is that the stories only continue for another few paragraphs, and two or three of them might jump onto the same page, making page 48 or 49 of these 50 pagers pretty ugly. Smart move, Munsey.

So now it's the third week of the big change. There's no point showing you the cover, since you pretty much saw it last week. Only the stories listed have changed, but I can show you those right here. 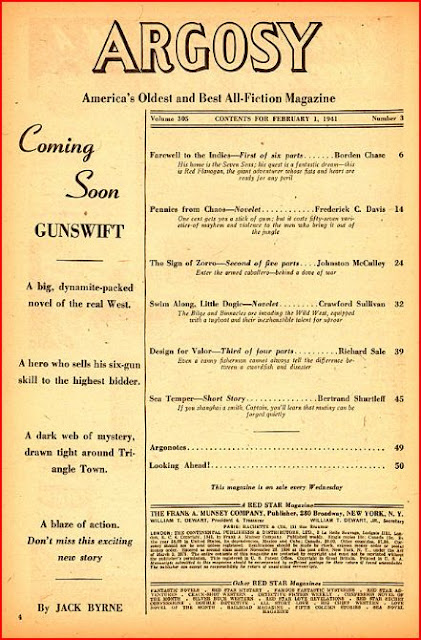 The February 1 issue has at least two strong stories in it, but to my dismay neither of them is Borden Chase's Farewell to the Indies. This serial is the second appearance, at least, of hero Red Flanagan. The opening pages look promising; for maybe the first time since the change there's a genuinely impressive double-page illustration. 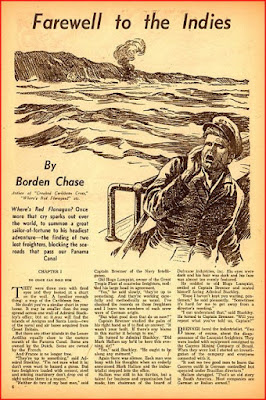 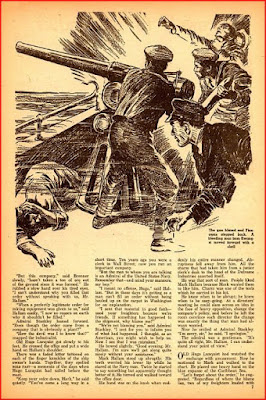 Unfortunately, Red Flanagan is no Smooth Kyle. Instead of a wisecracking government man bantering with his badass moll, Chase gives us this Irish "dreamer" whose romantic spirit is supposed to win us over. His first appearance in the story is okay; he's commanding a Chinese warship against the Japanese, but giving all his Chinese crew Irish nicknames seems a little much. Once he's back in America, summoned to investigate the disappearance of some freighters in the Caribbean, his whimsical romantic spirit quickly becomes insufferable. We're supposed to see Flanagan as a wise mentor to the young industrialist who comes reluctantly along with the ride, but I found myself wishing the youngster would punch Red in the face.

The other serials don't help much. I remain incapable of getting interested in Richard Sale's Design for Valor, while Johnston McCulley's Zorro remains the least interesting character of his own story, The Sign of Zorro. The only thing keeping my interest there is that McCulley is interested in the other characters, and I can report in advance that things pick up considerably, and Zorro himself finally becomes interesting, in the third installment on February 8.

The good stuff this issue comes from Frederick C. Davis and Crawford Sullivan. Davis contributes a novelet, "Pennies From Chaos," about the turbulent life of a Latin American chicle plantation. It's an entertaining adventure story of the sort becoming less common in Argosy, an adventure in which the Axis is irrelevant. It's particularly noteworthy by modern standards for including an interracial romance with a happy ending, as one of the protagonists dumps his shrewish crybaby of an ultimately unfaithful wife in favor of his smart, stalwart Girl Friday Guyra, "a modernized Maya girl of twenty who wore slacks, saddle oxfords and a pert red ribbon in her hair that was like a soft cloud of jet-black smoke in which irridescent glistens wavered." The prose is purple but makes its point. Guyra is thoroughly de-stereotyped, a high school basketball star who's self-evidently the most fitting mate for a pulp hero, and it's cool to see a character like this get her man in the end after helping him defeat the local bandits with some expert marksmanship and a few well-aimed rocks.

Crawford Sullivan wrote a series of comical action stories for Argosy about the Bilge and Binnacle Club. Part of the gag was that he described the club's disreputable brawling sailors with faux elegance, as in this issue's story, "Swim Along, Little Dogies."


If you have ever spent much time in the vicinity of Fort Street, you undoubtedly know about the Bilge and Binnacle Club. A purely social organization, it was founded some years ago to promote good fellowship and brotherly love among the merchant seamen of our western coast....The club room is located in the back end of Istvan Karamoz's saloon, and all the members find it convenient to sleep there so they can always be on hand for meetings. The room contains a lot of iron cots, a genuine Wilton-type rug, and an earthenware water cooler borrowed from Fink Hall. The walls are decorated with the latest magazine covers and some artistic photos which Bottlenose Billings picked up in Port Said. Everyone who visits the club agrees that it is, indeed, pretty cozy.

It's the sort of place you might expect to find the Three Stooges if they were sailors, and those we do find there are very Stooge-like in their boisterous violence. They're pretty much cartoon characters, and for Sullivan's comical purposes that's all they need to be. The Bilge & Binnacle stories are what used to be called "rollicking," and while I kind of hate "rollicking" in movies and TV -- all too many allegedly comical western stories are guilty of rollicking -- Sullivan's tales often hit just the right anarchic note that Argosy needed in these years. In this one the Club goes west to ferry a beleaguered cattleman's herd across a newly-made salt lake, wreaking havoc along the way on rustlers and an Indian chief who isn't quite what he seems. It's unrepentant slapstick and for once I can appreciate that.

Also entertaining is the closing short story, Bertrand Shurtleff's "Sea Temper," about a blacksmith shanghaied onto a ship bound for a multi-year voyage who turns the tables on a tyrannical captain. The hero's self-liberation may be too good to be believable, but Shurtleff gets you to identify with his outrage enough that you want him to beat the captain without caring too much how he does it. So apart from the serials February 1 is an okay Argosy, if you can overlook the ugly walls of text, the ugly jump pages and the erratic illustrations. Will things improve next week? Watch this space to find out!
Posted by Samuel Wilson at 8:15 PM