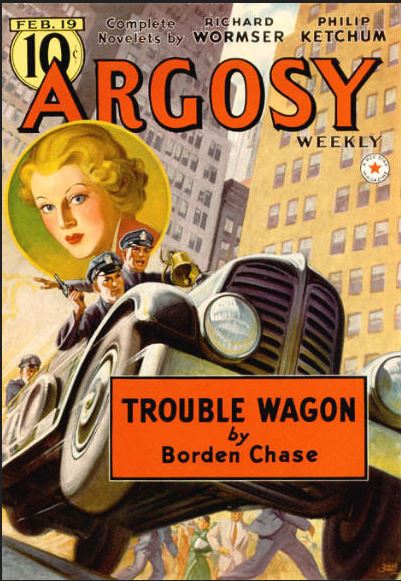 A dynamic cover -- I don't recognize the artist and the Fiction Mags Index doesn't give a credit -- launches a new Borden Chase serial in this 1938 Argosy. It looks like Chase is dealing with police this time, though the dame in the circle might be mistaken for Smooth Kyle's girlfriend Gilda Garland. By my standards this issue has a strong lineup. Cover-billed Richard Wormser and Philip Ketchum are good writers, though I don't know whether Wormser's "Black Orchids Tonight" is a Dave McNally story or not. Ketchum's "Galleons for Panama" is clearly a period piece, but that was his specialty, as he would show the following year with his Bretwalda series about a magical axe and its owners across the centuries. Luke Short continues his Golden Acres serial while Jacland Marmur, a nautical specialist I discovered and enjoyed in the pages of Collier's, contributes a short story, "Typhoon Cardigan." Following in the steps of Joseph Conrad, Marmur was a Pole who made good writing in English. Among the lesser contributors is one Logan Ancram, whose "The Golden Glyphs" is his only known contribution to pulp fiction. What's more likely: that "Ancram" is a pseudonym or that someone only had one publishable story in him for his whole life? No matter; the authors I've mentioned would make this issue worth happening, though it'd prove pricey to collect Trouble Wagon in its five-part entirety, since the issue it wraps in has Tarzan on the cover. You'll see it soon enough.
Posted by Samuel Wilson at 12:00 AM