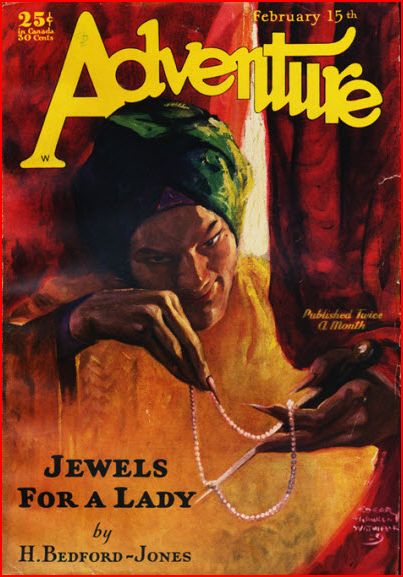 That's a beautiful cover by Edgar Franklin Wittmark from a 1930 Adventure. I have no clue what the cover story, H. Bedford-Jones's "Jewels For a Lady," is about, but it's safe to guess that an Adventure cover story is Bedford-Jones in top form. The so-called "King of the Pulps" spread the wealth around the four major adventure pulps, with Blue Book getting the most, with plenty to go around for other magazines. Two other heavy hitters this issue are Arthur O. Friel, who starts a two-parter, and Thomson Burtis, who most often did airborne crime-fighting stories but worked other genres as well. Bill Adams, who has a fiction piece this issue, was virtually Adventure's house philosopher during the 1920s, when his non-fiction "Slants on Life" appeared regularly. Redvers' Cry Havoc!, introduced so dramatically on last issue's cover, wraps up this time, while E. S. Dellinger, Henry LaCossitt, Edmund M. Littell and Barry Lyndon round out the fiction lineup. Adventure is supposed to be past its prime by this point, but on an issue-to-issue basis I doubt any rival could top it yet.
Posted by Samuel Wilson at 12:00 AM