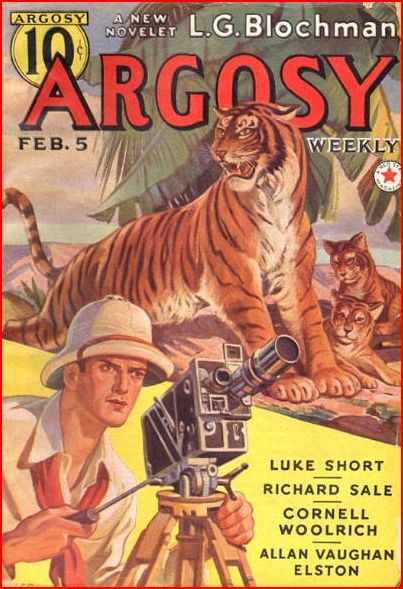 Nice move, Argosy. This 1938 cover lists five authors on the cover but forgets the guy who wrote the cover story. If I see animals and a man with a movie camera on an Argosy cover I say to myself, "That's Dave McNally." So I look at this cover and I ask myself, "Where's Richard Wormser?" Sure enough, Wormer has a McNally novelet, "The Singing Cats of Siam," inside. McNally must have been pretty popular, since we've seen him already this year, when our Calendar began. Not to acknowledge Wormser was either an error or a slap in the face, but it didn't stop him from submitting McNally stories, or Argosy from publishing them. In any event, Wormser needn't have felt overly slighted, since Edgar Rice Burroughs didn't make the cover, either, for the fifth chapter of his Carson of Venus serial.

I wonder how many browsers first assumed that L. G. Blochman wrote the story about the cameraman and the cats. His actual contribution was "Money for Sale," which could have been about anything. Blochman wrote a lot of stories set in Asia, but he also translated mysteries by Georges Simenon and others from French to English for American markets. The other cover-billed authors are known quantities, with Elston the least impressive to me. Richard Sale's story has one of those formulaic pulp titles from the period: "X Had a Y," in this case "Perseus Had a Helmet." Why this particular formula was so popular I can't say. Cornell Woolrich's contribution is "Wild Bill Hiccup," likely not one of the suspense master's finest or most suspenseful hours. The Wormser and the Blochman would probably make up for that.
Posted by Samuel Wilson at 12:00 AM