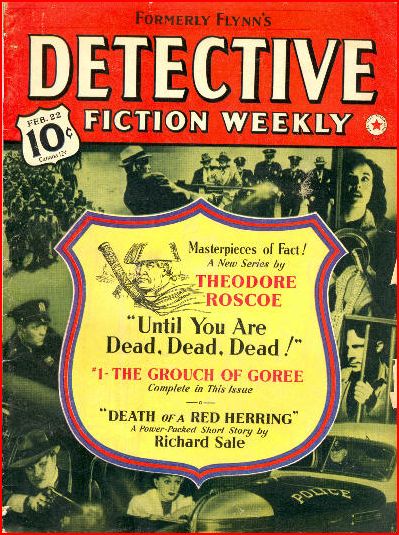 We've moved back in time approximately a year before yesterday's Calendar entry, to when Detective Fiction Weekly was still weekly. Like Argosy, DFW had seen its page size expand while its page count shrank in January 1941. Similarly as well, DFW had a nasty standard photomontage cover design which it actually had adopted well before Argosy did likewise and well before the size change. The top bar, red this week, changed color from issue to issue. There's still more fiction than fact at this point, counting Theodore Roscoe's presumably fact-based fiction, "The Grouch of Goree."  Richard Sale is at the end of a streak this week; he had placed a story in every issue of DFW so far in 1941, eight in all. It seems fair to say that Sale was the magazine's star writer from the end of 1936, a year when he did most of his writing for Black Book Detective, until early 1942. The other genre heavy hitter this week is Cleve L. Adams, who continues his serial Decoy. There would be one more cover style change before DFW acquired the look you saw yesterday. You'll see what I'm talking about approximately two months from now.
Posted by Samuel Wilson at 12:00 AM