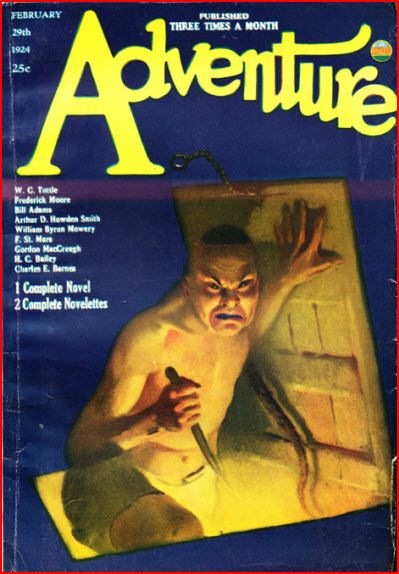 When Adventure was publishing three times a month the third issue of the month usually was dated February 28. Since only one leap year fell within that period, this 1924 issue is the only Adventure to carry a Feb. 29 cover date. Robert Robinson contributes a fierce Yellow Peril cover though, as usual in this period, it probably doesn't illustrate one of the stories inside. The highlight for regular Adventure readers would be the latest exploit of Hashknife Hartley, W. C. Tuttle's most enduring cowboy detective. Another star writer, Arthur D. Howden-Smith, was taking a break from Swain the Viking and in the middle of a serial, Porto Bello Gold -- a prequel to Treasure Island and this the Black Sails of its day, but with the still-necessary permission of the Robert Louis Stevenson estate. William Byron Mowery, a specialist in Northwestern stories, and Gordon MacCreagh, who usually wrote African tales, have stories in this issue, while Bill Adams, who regularly contributed a "Slants on Life" column to the magazine, throws in a fiction story as well. The thrice-monthly period probably saw Adventure at its peak, so here's a salute to a typical issue on its 92nd -- or is it 23rd? -- birthday.
Posted by Samuel Wilson at 12:00 AM