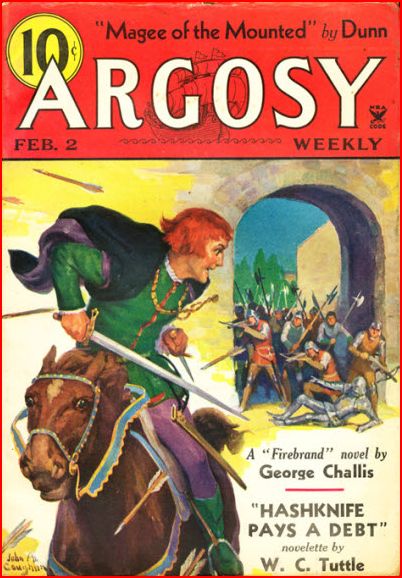 The fellow making a hasty getaway is Tizzo, "the Firebrand," the Italian Renaissance swashbuckler created by George Challis. Challis was created by Frederick "Max Brand" Faust as a brand name for historical swashbucklers like the Firebrand series. Tizzo dominated Argosy in 1935 like no other character. First appearing in the November 24, 1934 issue, the turbulent redhead, whose actual favorite weapon is an axe, would get six covers the following year, beginning with this one. He starred in two serials (this one is The Great Betrayal) and four "short novels" during a blistering run that ended in August. You'll be seeing more of Tizzo on the Calendar because I own several of those issues, though not yet this one.

While Tizzo's print career was meteoric, that of Hashknife Hartley was far more enduring. Hashknife is one of W. C. Tuttle's comical western detectives, the star of a genre Tuttle pretty much had to himself. Tuttle wrote Hashknife stories for more than 30 years, starting in Adventure in 1919. As I've noted before, series characters like Hashknife belonged to their authors, for the most part, rather than any publisher. That meant that Tuttle could place a Hashknife story in Complete Western Book for Newstand Publications in October 1934, another in a December Argosy, then this one, and then another in Adventure the following month. Eventually, in 1938, Hashknife settled down at Short Stories, where new stories kept appearing until 1951. The prolific Tuttle would create a new character for Argosy later this month who would prove Hashknife's nearest rival in popularity; we'll attend to his birth in due time.

J. Allen Dunn was a big enough name that he could be billed by his last name only above the logo, like Boris Karloff was in Universal movies around the same time. "Magee of the Mounted" is, to take a wild guess, a Mountie story and a one-off. Another old-timer, William Merriam Rouse, contributes "The Shorn Lion," while F. Van Wyck Mason wraps up his Captain Long Knife serial. James Edward Grant, soon to go to Hollywood and make his name as a screenwriter, and Don Waters add short stories to round out what looks like a typical solid 1935 Argosy. Over the next few Tuesdays we'll look at some 1935 Argosies from my own collection; then I'll really know what I'm talking about.
Posted by Samuel Wilson at 12:00 AM