If the Sidney Herschel Small story I linked you to the other day gave you an appetite for more, or if you're interested in freebooting adventures in 1930s China, here's the one and only Small story I own in its original pulp form. As of 1935 pulp stories set in China had not yet taking a propagandistic turn. Sure, the Japanese are bad guys, but in this period it's hard to find a good guy in China. No one was obligated to treat Chiang Kai-shek as one, for instance. China stories thus could take a hard-boiled, almost amoral tone, if not a "plague on all your houses" attitude toward the brutal factions vying for the country.

In this story, Red Carson and his rugged Mongol sidekick encounter a "Red" warlord -- interestingly, Small describes his villain as a "theoretical" Red, as if he's only playing Communist for convenience -- while trying to rescue some Christian missionaries. This is a startlingly grim story, in which the hero allows an innocent white woman to be poisoned in order to persuade the villain to take poison himself, and tells the victim's bereaved husband that she's better off, since she'd been driven mad by the atrocities she's witnessed. 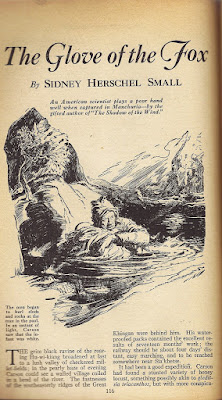 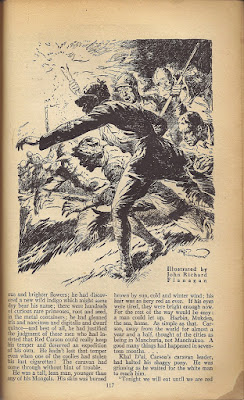 If you download the story you'll see why Blue Book had a reputation as the best illustrated pulp magazine. Other publishers were often stingy with illustration, but Blue Book was lavish with art from the likes of John Richard Flanagan, who contributed a couple of double-page spreads to the Small story. I've put the September 1935 cover at the front of the file so you can get the full impact of those spreads if you go to two-page mode. "Glove of the Fox" is a brisk 11 pager and the first of more to come from this issue of Blue Book. Look for more Pulp Reading scans in the days to come.