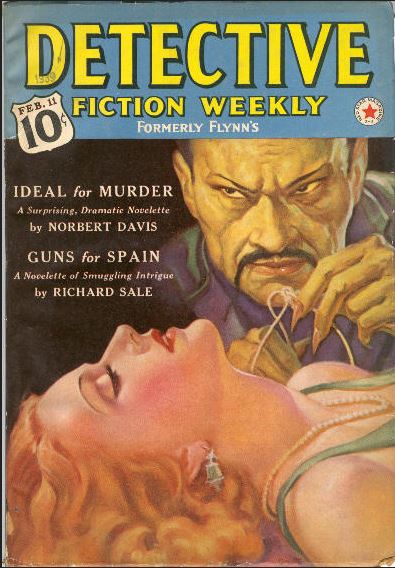 What would a Pulp Calendar be without at least one appearance of the Yellow Peril? Orientals fascinated pulp writers and readers. The problem with the way pulp portrayed Asians was that they went to opposite extremes, portraying them either as gibbering morons, usually as comedy relief, or (and usually more often) as sinister sadists. There was an alluring ambiguity to the pulp Oriental, since pulp never seemed quite as certain of Asians' inferiority as they were about other racial groups. But pulp was still just as racist towards Asians as it often was toward other groups because writers rarely imagined an ordinary guy or dame who just happened to be Asian. The whole point of having an Asian in your story, most of the time, was to indulge in fantasies of Otherness, which in the case of Asians often meant fantasies of setting aside American morality and getting away with murder, as often happens in stories set in Chinatown in which the murderer is the hero, if only because he kills someone even worse, as in the works of Walter C. Brown or Arden X. Pangborn. One can go too far the other way, of course, in refusing to imagine the possibility of Otherness on the assumption that people everywhere are essentially the same in all ways that count. That approach can result in a certain blandness of pop fiction, and in the meantime our fantasies of Otherness have been transferred to the paranormal ghettos of so many fictional cities, where vampires, werewolves, faeries and others play the roles for 21st century readers that the archetypal Chinaman played for our grandparents and great-grandparents. Once it became bad form to define people by Otherness, while people still dreamed and fantasized about it, Otherness had to become literally inhuman in order to endure in print.

I assume that this 1939 DFW cover illustrates the Norbert Davis story, though the title, "Ideal For Murder," gives away nothing. More interesting for me would be the Richard Sale novelet, "Guns For Spain." Pulp regarded the Spanish Civil War with some ambivalence, since it pitted fascists against leftists. Depending on how threatened an author felt by the Germans and Italians, one could take a "plague on both your houses" approach to the conflict, allowing maximum freedom of action for a freebooting hero. I'd be interested in seeing Sale's angle on the war, even though this story may well take place entirely outside Spain. Along with these featured stories, Judson Philips wraps up a serial and William R. Cox, a writer I identify with westerns, contributes a short story, as do Robert Arthur, William E. Brandon and one E. O. Umsted. The Fiction Mags Index doesn't give a cover credit but I like the tastefully lurid look of the thing. It isn't barking mad looking like the horror pulps of the period, but it still says "pulp" to me.
Posted by Samuel Wilson at 12:00 AM