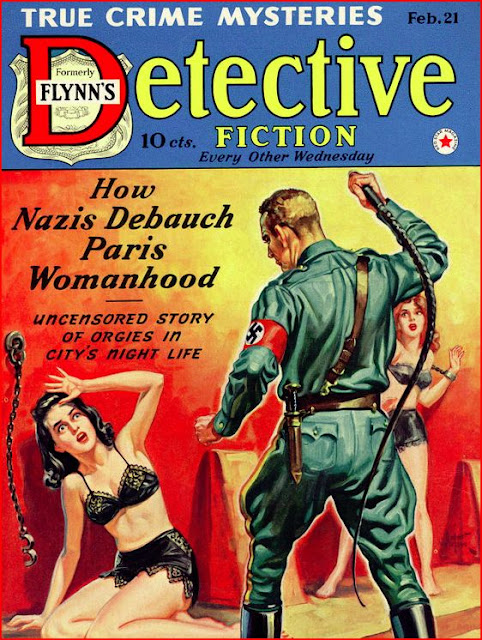 By 1942 the former Flynn's was no longer Detective Fiction Weekly. Like its Munsey stablemate, Argosy, Detective Fiction had gone biweekly in the fall of 1941. It wouldn't stay that way for long; with the April issue it would go monthly, limping towards oblivion until rescued, like Argosy, by Popular Publications at the end of the year. By this point, there isn't much detective fiction, either. Richard Sale and Lawrence Treat contribute short stories while James Edward Grant continues a serial, but the rest of the 66 page issue is true crime. The cover story counts as that, I suppose, but while we assume the Nazis capable of anything I suspect there may have been some exaggeration in this particular expose. There's a sad irony is this exploitatively crappy cover. Back in 1940, when DFW, like Argosy, did away with cover paintings in favor of a standard format, Munsey justified the move in part by claiming that the new covers were more tasteful. Clearly that appeal to taste had not reversed Munsey's plunging fortunes, so now the publisher tries for the opposite extreme. They were willing to pay painters again, but not, it seems, good ones. Still, this one doesn't look so bad compared to some of the atrocities Argosy produced in 1942. Whatever happened to once-mighty Munsey from roughly 1938 to this point is a cautionary tale I wish I knew more about. For now, most of it is a mystery to me.
Posted by Samuel Wilson at 12:00 AM