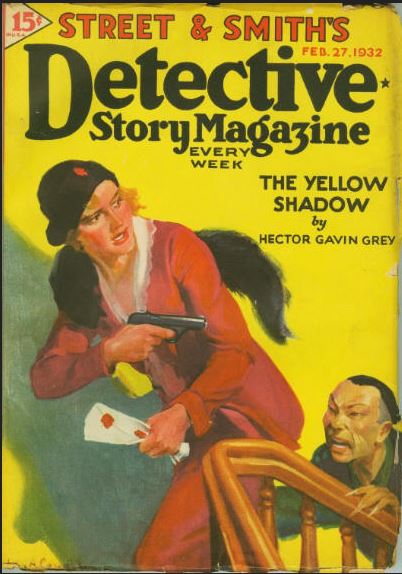 In its heyday, Street & Smith had three weekly "Story" magazines. Detective Story is considered the first detective pulp, though there were plenty of precursor detective dime-novel magazines. It may have been first, but it wasn't the best. Detective Story doesn't get the same love extended to Black Mask, Dime Detective or even Detective Fiction Weekly. I guess it missed out on or caught on very slowly with the hard-boiled trend. The canonical authors of the genre don't seem to have congregated there. The authors of this 1932 issue are completely unknown to me. That is a nice Yellow Peril cover by John A. Coughlin, however. For whatever reason, Detective Story didn't have the staying power of Street & Smith's other "Story" weeklies. While Love Story and Western Story maintained a weekly schedule all the way to 1943, Detective Story would lapse to biweekly before 1932 was over. It would go monthly in the fall of 1935 and stay that way for most of the duration. It was quarterly by the time Street & Smith killed most of its fiction mags in 1949.
Posted by Samuel Wilson at 12:00 AM