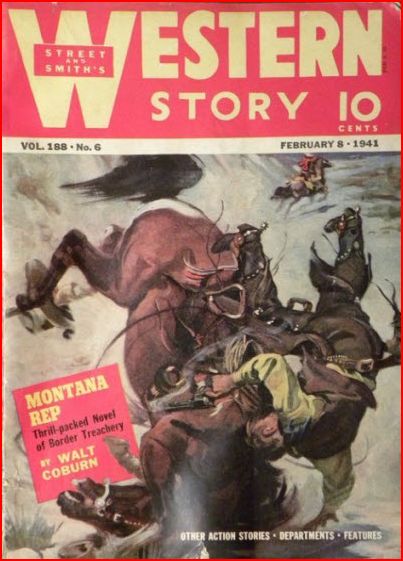 Another dynamic H. W. Scott cover catches the eye for this 1941 issue of Western Story. The main attraction inside is a 40+ page Walt Coburn novelet. The famed "cowboy author" would become omnipresent once Western Story went monthly in 1944, but at this point you could still go three or four weeks at a time without seeing Coburn. That matters because by some point in the Forties Coburn was past his prime. I've read some stuff of his from the late Forties that borders on the incoherent, but "Montana Rep" is closer in time to some still-decent stories he wrote for Argosy in 1940. William Colt MacDonald, creator of the Three Mesquiteers, one of whom was played by John Wayne when the Duke was still paying his dues, has a serial in this number. Harry F. Olmstead is probably the best known of the other authors this week. I think I'd prefer something from Popular Publications in this period, but Street & Smith's covers make their westerns look more attractive at first glance.
Posted by Samuel Wilson at 12:00 AM