From my battered but unbroken February 9, 1935 issue of Argosy, here's the first of three installments of Eustace L. Adams's serial Anywhere But Here. Check out my Feb. 9 Pulp Calendar piece for more info about the story. Adams was a wartime flier -- publicity placed him with the legendary Lafayette Esquadrille -- whose main gig was a series of aviation adventures for kids featuring Andy Lane. Pulps were his adult writing and he rose to the occasion with crisp action-adventure tales that are part hard-boiled and a little part Lost Generation in their world-weary attitude. Adams broke into Argosy in 1928 and, apart from flying pulps, that remained his main pulp market, with Short Stories running a distant second. He also wrote for such slicks as The American Magazine, a monthly from the makers of Collier's, and Cosmopolitan when it was more fiction-oriented than it is today. 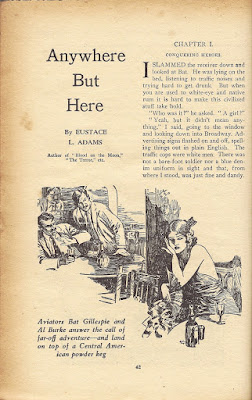 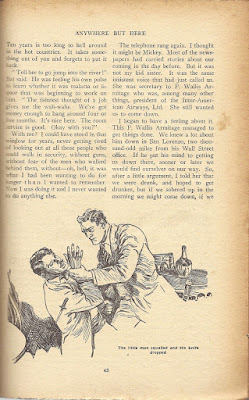 This is a good-sized, thirty-page opening installment graced with the spot illustrations of the main characters with which Argosy broke up the monotony of text in 1934 and 1935 -- an enhancement it made no sense to abandon. Rest assured that I own the February 16 and 23 issues, so as long as they're cooperative you can expect to get the complete three-part serial if this installment gets you interested. Begin now this combination bromance and romance in turbulent Central America by clicking the link below: