VINTAGE PAPERBACK OF THE WEEK: Williams Forrest, THE GREAT DEBAUCH (1958) 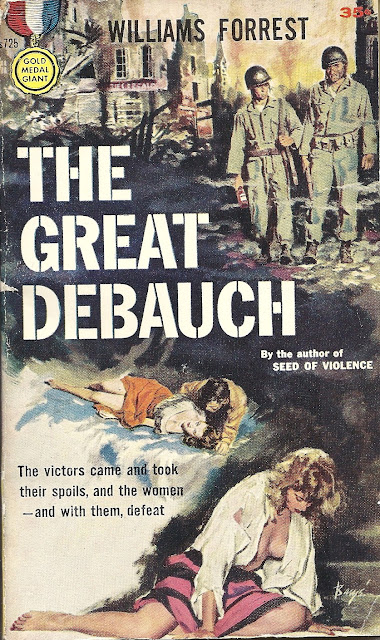 Paperback originals from the 1950s were sometimes more ambitious than their genre reputation suggests. They probably were the last resort for writers who couldn't land a hardcover contract, for whatever reason. So long as a publisher saw something exploitable in the story, and you could at least write competently, you had a shot at softcover. Williams Forrest presumably had the competent part nailed down. He never published any pulp fiction, apparently, but went straight to the slicks. During the 1950s he appeared frequently in The Saturday Evening Post, the top slick weekly, and he'd published novels before. The Great Debauch isn't exactly Post material, as the exploitation cover suggests. This relatively hefty original (220 pages) belongs to a briefly popular genre set in Allied-occupied Europe (or Japan) after World War II. The subject matter of such stories can be summed up best as "fraternization." Debauch adds a fresh angle by making his protagonist, Lt. Mike Fathom, responsible for discouraging fraternization through propaganda broadcasts to American troops. That angle associates Debauch with another contemporary subgenre concerned with the power of advertising and the anxieties of advertising men. 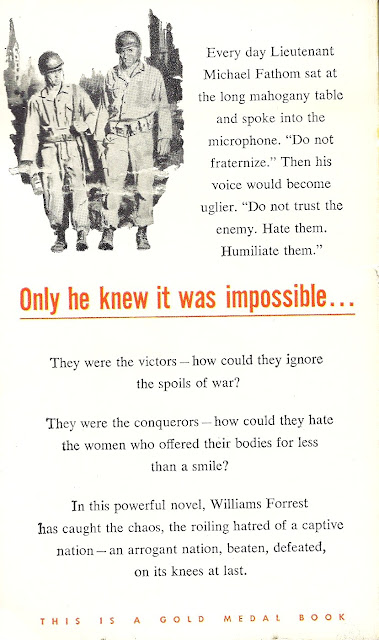 Mike is, of course, a hypocrite, or else we'd have no story. Like many GIs, he takes full advantage of the awesome power he has over the helpless civilian population of a defeated country. Fathom's story takes him on an arc from contempt to compassion for Germans, though his love interest actually is a French woman, one of many who went or were sent to Germany during the war, all of whom are suspect on some level. For a while a threat looms over the story after we learn that the Americans are hunting a French woman who'd ratted out GIs to the Gestapo. Could it be Jeanine, Mike's girl? Apparently not, but we get a strong sense of the vulnerability of all women to occupiers and vengeful compatriots. Mike shares a building with Russian troops whom he has to discourage at gunpoint from raping a maid, until the night he loses interest. The Russians play a small role in the story, however, and Americans are quite menacing on their own. We meet a Major Dickey and see him kick a German prisoner to death during an interrogation, for instance, but neither he nor any of the variably disturbing characters we encounter really counts as a villain. The sudden shift in priorities from war to occupation seems just as traumatizing for the troops, on an emotional level at least, as any battle.

The cover goes just a little overboard in conveying the tone of the novel. While Forrest is restrained (or constrained) in his language, Debauch has the intimate frankness one probably expects in paperback originals. In its efforts at intimacy Debauch betrays its author's aim at something bigger than a paperback original. Forrest writes post-coital scenes in the stiltedly conscientious style you might identify with Ernest Hemingway's later work, in a manner meant to convey a certain gravitas to the lovers' emotional intimacy, if not also the dialogue of Americans with foreigners. Forrest also aspires to a sensuality of description, both earthy and abstract, more reminiscent of Norman Mailer and his contemporaries. As you might suspect, it's very hit-and-miss but you come to admire the earnestness of Forrest's effort to craft consciousness while flexing writer's muscles one rarely exercised writing for the Post. He also has a good eye for dramatic episodes, from one woman's violent attempt to resist repatriation to Mike's peculiar rescue of an old aristocratic couple from the humiliation of having to sweep the streets while bourgeois Germans (no less or more guilty in his eyes) look on mockingly. The strangest storyline involves Mike's obsession with the poor German family living across the street from his quarters and their struggle to maintain dignity in privation. He eventually decides to give the daughter of the family a maid's job, and the unstable Major Dickey takes her on as a lover even after Mike learns that she's not the daughter of the family but the last loyal whore of an old pimp and his wife. Dickey clobbers Mike when he impugns the girl's honor, only to learn that the girl, who had threatened to spit in Mike's mouth while he was down, has syphilitic chancre sores in her own mouth and has likely given Dickey the clap. That on top of his guilty feelings about killing a German leads to Dickey's suicide, moments after Mike had saved him from getting shot by an American sentry. That subplot puts us more firmly in paperback-original territory, but as a whole Great Debauch is most interesting for the ways it tries, not always successfully, to transcend its softcover bounds.
Posted by Samuel Wilson at 7:36 PM