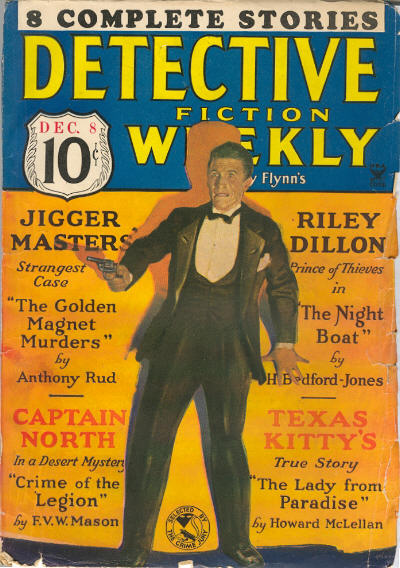 Who is this guy??? Someone new to Detective Fiction Weekly would probably get no clue from this 1934 cover, though the new reader probably could guess that it isn't Texas Kitty. I can eliminate H. Bedford-Jones' Riley Dillon, since I'm used to seeing him on covers in top hat and monocle. So he's either Anthony Rud's Jigger Masters, F. V. W. Mason's  Hugh North, or a generic gunman. Dillon was a gentleman thief HBJ brought over from Mystery magazine, where his stories appeared under the Rodney Blake pseudonym. Masters was a character Rud revived in 1933 after writing a run of stories about him back in 1918. North had been starring in his own book series since 1930, and would continue well into the 1960s, but Mason published a number of novelettes in the pulps; "Crime of the Legion" is one of two to appear in DFW. And if that weren't all for this week, there's the debut of a series character, Laurence Donovan's Pa Howdy, who would appear three times in DFW over the next few months before going into hibernation. Donovan would revive him for a run of stories in G-Man Detective beginning in 1942. Ernest Poate and K. (for Kay or Kaye, another case of initial only = female) Krausse contribute short stories. As for Texas Kitty, perhaps only those who've actually read this issue can tell who she was....
Posted by Samuel Wilson at 1:14 PM