I remember reading about the time William Gaines, the publisher of EC Comics, was called before a congressional committee to testify about the violent content of his since-acclaimed horror comic line. Gaines was confronted with a cover that showed a woman's head that had just been severed from her body, and he was asked whether he thought the cover was in good taste. Gaines said he thought it was in good taste, since it did not actually show blood dripping from the victim's neck.

To my knowledge no one ever brought pulp publishers before Congress to answer for their youth-corrupting content, and yet ... 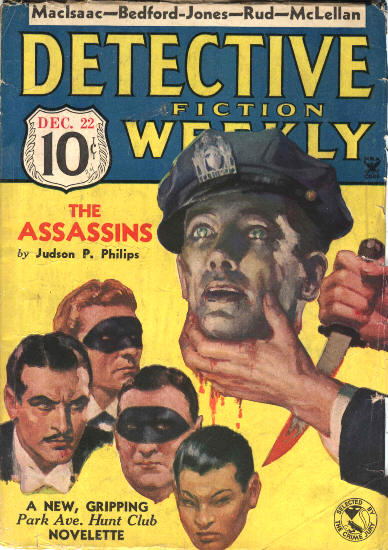 So I suppose the critics had a point who said that pulp magazine covers often repelled potential readers, or made them embarrassed to read them on the bus or train. I can definitely imagine this 1934 Detective Fiction Weekly turning off our more sensitive forebears, however much they may have wanted to read the latest exploit of Judson P. Philips' gentlemen vigilantes in the Park Avenue Hunt Club, or the latest caper of H. Bedford-Jones' gentleman thief Riley Dillon -- or, if it came to that, the latest, or to be precise the second adventure (of five total) of Richard Sale's Owl-Eye Venner. This doozy is particularly shocking because DFW covers at this time usually were relatively sedate compared to the rising "shudder pulps" or even to DFW's Munsey stablemate Argosy. It wouldn't surprise me if the editors got some negative feedback from readers, though we'd probably have to track down some early 1935 issue to find out what they let people say about it.
Posted by Samuel Wilson at 3:04 PM