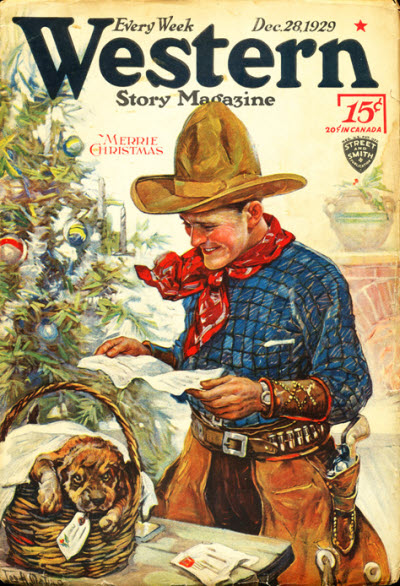 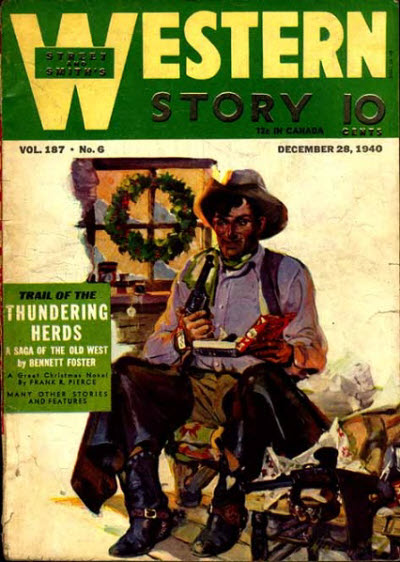 In earlier times Western Story advertised its content as "Big Clean Stories of Outdoor Life." It shouldn't surprise us to see the magazine take Christmas so seriously with that attitude. As with yesterday's pairing, you'll see that the earlier issue is heavier on the Christmas content, with such stories as Cherry Wilson's "Lonesome Santa Claus," Hugh F. Grinstead's "Doubling for St. Nick" and Frank Richardson Pierce's "Dad Simms Plays Santa." I'll guess that "Hungry Ground," Pierce's contribution under his Seth Ranger pseudonym, offers an alternative to the festivities. Speaking of pseudonym, Frederick Faust is here under his less-common Peter Henry Morland pen name, continuing his serial The Horizon of Danger. Pierce contributes the one obvious Christmas story in the 1940 issue, "Santa Claus in Chaps," while S. Omar Barker inevitably offers a poem, "Bunkhouse Christmas." These and other items are bracketed by the beginning of a Bennett Foster serial and the conclusion of Peter Dawson's. One suspects that the Christmas stories got somewhat monotonous over the years, there being probably only a limited number of situations you could write up, but readers with the holiday spirit probably didn't mind much.
Posted by Samuel Wilson at 1:11 PM