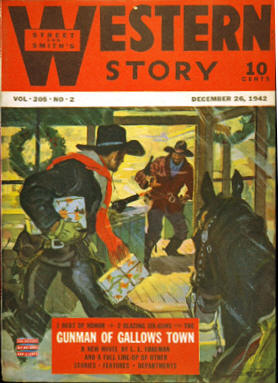 And you thought you had to fight for that perfect gift? Return with us now to the thrilling days of 1942, near the end of Western Story's long run as a weekly magazine. Street & Smith tended to run holiday-themed or at least wintry covers on the last issue each year of its weekly western pulps. There'd usually be holiday-themed content as well. It isn't clear whether the cover actually illustrates L. L. Foreman's "Gunman of Gallows Town," or whether that story had any holiday elements. But there can be no doubt about George Cory Franklin's "Christmas on the Lake Fork," or S. Omar Barker's "Cow-Range Christmas."  By this time old-timers like Walt Coburn or Frank Richardson Pierce (or "Seth Ranger") weren't dominating Western Story the way they used to. Apart from Franklin, this issue boasts mostly a younger generation of writers, including Foreman, Peter Dawson, Tom W. Blackburn, Leslie Ernenwein and Bob Obets. Western Story would make it through January 1943 and halfway through February before finally cutting back to biweekly.
Posted by Samuel Wilson at 1:27 PM