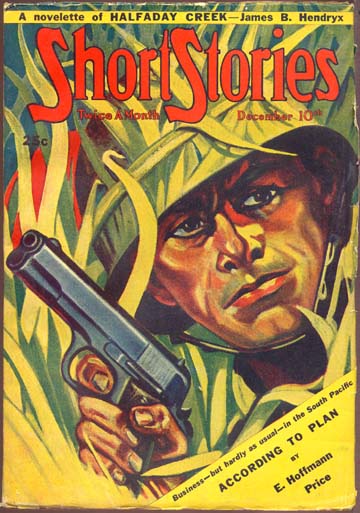 Here's a straightforward wartime cover for a 1943 issue of Short Stories, illustrating E. Hoffman Price's lead novelette "According to Plan" -- at 43 pages they may even have called it a novel. Despite the relevance of Price's piece, this issue has a strong Klondike flavor, featuring both the magazine's most popular series, the Halfaday Creek tales of James B. Hendryx, but also Frank Richardson Pierce's wise old sourdough No-Shirt McGee, who abandoned his Argosy birthplace in favor of Short Stories in 1942. You also get short stories by Berton E. Cook and H. S. M. Kemp, an episode of H. Bedford-Jones' sci-fi series "Tales of the Strato-Shooters," and a mystery serial chapter by Harry Bridge. Looks like a pretty good selection for a magazine that was still cranking out 160 pages twice a month in one of pulpdom's most impressive long runs.
Posted by Samuel Wilson at 3:47 PM