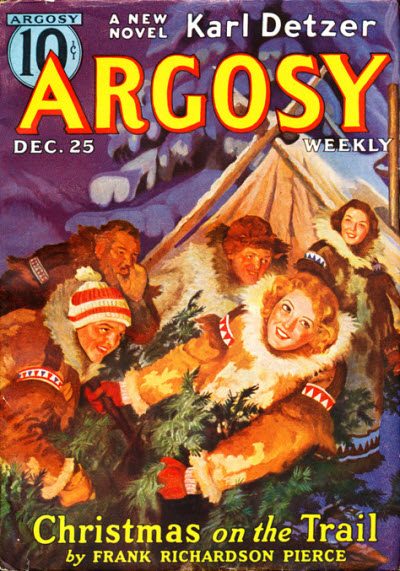 Argosy's editor sounds almost ashamed of his 1937 Christmas cover in his intro to this issue's Argonotes page, which he declares an Xmas-free zone.

In spite of the date on this week's cover, the general reindeer and mince-pie effect of our cover, and the novelet-gesture in the general direction of the merry gentleman in the fur-trimmed red suit, this is going to be one place in the magazine where the Yule is a Forgotten Season. In fact, right here and now we declare this corner a Hospice Sacred to All Ye Winded Shoppers and Package-Laden Pedestrians who firmly intend to let out a Loud Scream if anyone so much as hums Jingle Bells within earshot.


The editor confesses to Christmas fatigue, reminding us that already by 1937 people felt that the Holiday (shopping) season went on all too long. I've wondered this month why there weren't as many holiday-themed pulp covers in December as you might expect, and the answer should have been obvious to me. Pulps were all about escapism, and for many people Christmas itself was something to be escaped. Despite that, here is Frank Richardson Pierce's "Christmas on the Trail," starring his beloved sourdough No-Shirt McGee in his younger "beshirted" days. In fact, it's a tale of his first adventure in the Yukon as the greenest of checakos, back in 1897 -- McGee is presumably in his late fifties as he narrates from 1937. He isn't really the protagonist of his story, however. The real hero of the story is Two-Step Sue, a dance-hall girl with a heart of gold who takes pity on a young family risking everything on the trip north and acts as their secret Santa as well as morale-booster for McGee and the whole struggling group. There's pathos to the story as she breaks up with her more mercenary boyfriend along the way, but this turns out to be the sort of Christmas story with a happy ending for everybody, or at least for everyone who survives the avalanche midway through the tale. It went over well enough that a late December McGee story became a short-lived Argosy tradition (1937-40), though there was only one other Christmas cover during that run. For a pulpy dose of holiday cheer from almost eighty years ago, give "Christmas on the Trail" a look by following this link.
Posted by Samuel Wilson at 12:00 AM