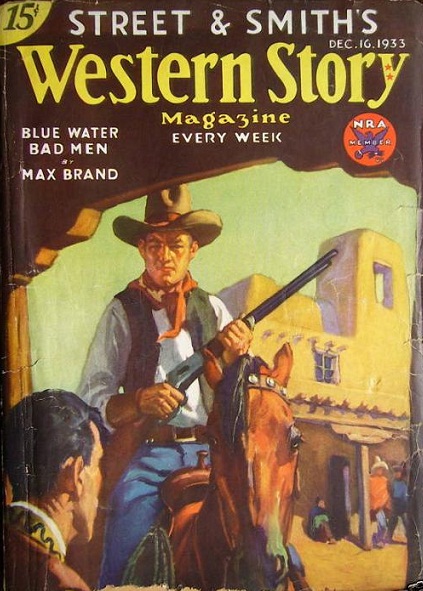 Whenever I see Max Brand credited on a Western Story cover I always want to check out the rest of the authors, especially when I don't recognize the names, to see if Frederick Faust was cashing a second check under one of his many pseudonyms. Max is all by his lonesome this time, however, -- and his serial was published as a novel later under the more generic title Mountain Riders -- but if you're interested in pseudonyms, this 1933 issue sports a couple. The serial Outlaws Three, which concludes this issue, apparently is the first appearance of "Peter Field" a pseudonym used by many authors and many publishers, to whom a later series of "Powder Valley" novels were credited. Meanwhile, "Carlos St. Clair," a prolific Western Story contributor, was actually Carolyn St. Clair King, a woman writer who did without giveaway initials in her pseudonym. W. C. Tuttle and Robert Ormond Case, of course, appear as themselves.
Posted by Samuel Wilson at 12:30 PM