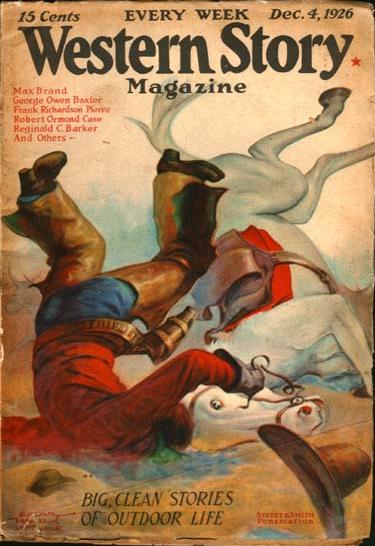 No animals were harmed in the making of this 1926 Western Story cover. This was the period when the Street & Smith weekly boasted of its "Big Clean Stories of Outdoor Life," which means we're not dealing with Spicy Western here. This looks like a typical Twenties issue with two items from Frederick Faust. As Max Brand he wraps the serial The Iron Trail, while as George Owen Baxter he continues The Bells of San Filipo. "Baxter" was one of Faust's longer-lived pseudonyms; he started using it in 1920, by which time he'd already been writing as "Brand" for three years. Other familiar names this time include Frank Richardson Pierce with the lead novelette and Robert Ormond Case with a story about his series character Lonesome McQuirk. Less familiar names are Reginald C. Barker (with the promising contribution "Frozen Beans"), H. H. Matteson (whose "Tum Tum" is presumably more of a northwest story) and Frank Triem, who takes us back to culinary territory with "With a Pinch of Salt." Add the regular columns and non-fiction features and you get 144 pages a week, a pretty good deal at the time.
Posted by Samuel Wilson at 4:26 PM