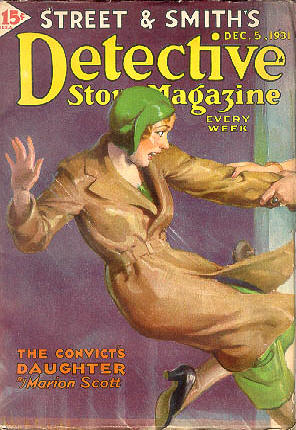 A starkly dramatic woman-in-peril cover fronts a 1931 Detective Story with two prominent female contributors. For cover author Marion Scott, the Street & Smith weekly probably was a step down in prestige as it became her primary market after several years of publishing regularly in Black Mask. Similarly, Elisabeth Sanxay Holding published mainly in the slicks, both before and after her serial Brides of Crime wrapped up this week. It was one of three serials Holding published in Detective Story between August 1931 and March 1932. She returned sporadically to pulp but continued to stick to the slicks as she became one of the most acclaimed mystery writers of her time. The male contingent is led by Johnston McCulley, who begins the three-part serial A Million-Dollar Dog, but his colleagues are as obscure today as Marion Scott is, compared to McCulley and Holding.
Posted by Samuel Wilson at 4:03 PM