VINTAGE PAPERBACK OF THE WEEK: Edmond Hamilton, STARWOLF: THE WEAPON FROM BEYOND (1967) 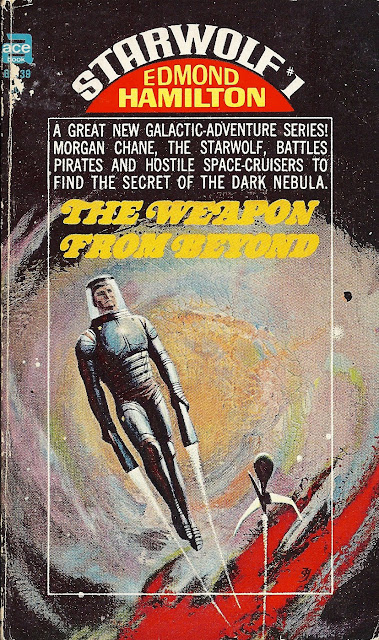 Edmond Hamilton was one of the founding fathers of "space opera," spacefaring tales in which science took second place to the conventions of adventure stories. The nickname "World-Wrecker Hamilton" testifies to an apocalyptic tendency in his stories, while the term "space opera," used to describe his work, echoes the "horse opera" label for formulaic westerns. Hamilton started out in Weird Tales back in 1926 and kept busy through the 1960s. No doubt beloved by many old fans for his Captain Future series and other adventures, he's probably considered the inferior writer in the household he shared with his wife Leigh Brackett. The Starwolf series was a late effort in a more hardboiled style that lasted for only three books. The protagonist is not the Starwolf but a Starwolf, one of a piratical race that plagues the stars, albeit an exceptional one. Morgan Chane is part Tarzan, part Superman -- the latter a character Hamilton wrote during the Golden Age of Comics. He's the son of human mercenaries who settled on the pirate planet Varna, a high-gravity world of finely-furred strongmen who are unbeatable space pilots because "nobody could endure physically the shattering impact of inertial stress [they] endured, maneuvering their little ships at man-killing velocities." The gravity is too much for Morgan's parents, but the boy grows into a mighty man, possibly stronger than any human in the galaxy, and a Starwolf in his own right until he falls out with friends and has to fake his death to escape their vengeance. 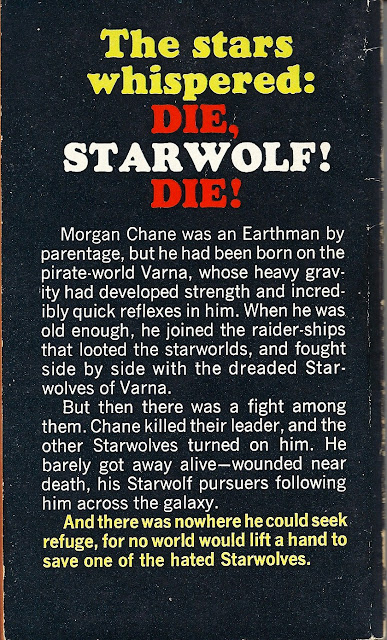 In The Weapon From Beyond Chane is rescued by a ship of mercenaries from Earth, headed for planet Kharal. Hamilton tells us that Earth is a relatively poor planet because the other planets in its solar system are resource-poor, so its primary export is its resourceful, honorable fighting men. Initially contemptuous, Chane comes to respect the Earthmen, especially their captain John Dilullo. They've been hired by the arrogant Kharalis to investigate reports that their longtime enemies, the albino Vhollans, have acquired a superweapon. Since Chane is genetically human he can pass for a Merc, though displays of superhuman strength and speed threaten to reveal him as a Starwolf. Only Dilullo knows that that's exactly what he is, and while he intends initially to exploit that knowledge and hold it over Chane, he too warms to his new colleague. Together they infiltrate Vhol, offering to sell the natives weapons or their own services, in order to find the secret weapon. The big twist is that the secret weapon isn't a weapon at all. It's the wreck of a massive expeditionary vessel of an apparently benign species, the Krii -- this book appeared in the same year that Marvel Comics introduced the Kree space empire -- that only records specimens from across the universe and uses no weapons whatsoever. Their science is so advanced, however, that they can neutralize all the technology and weapons of Vhollans or humans. The arrival of a Krii rescue mission after who knows how many years would be an anticlimax if you're expecting a big battle, but it has its appeal on a sense-of-wonder.

Hamilton writes artlessly in a manner that only betrays its age when he indulges in goofy made-up techno-jargon like the Mercs' "ato-flash." He sometimes editorializes in oddly irrelevant fashion, as when he describes a Vhollan red-light district that "was a gusty, crowded place but was not sinful, for most of these people had never heard of the Judeo-Christian ethic and did not know they were sinning at all." He isn't big on character development and most of his world-building is of the throwaway sort. Weapon From Beyond is padded somewhat by episodes that have no plot value but are meant to provide a momentary thrill, as when Chane's outing on a Vhollan pleasure boat is interrupted by, or interrupts, the ritual feeding of sea monsters.  It's really pretty bad for its first half, but picks up considerably in the second. The action highlight is an attack on the Merc ship by Starwolves who may or may not be hunting Chane. Hamilton ratchets up the tension by reiterating how hopeless the fight must be before Dilullo takes Chane's advice that the best defense against Starwolves is a good or reckless offense. One we discover the Krii ship and meet the Vhollan scientist who's been exploring it and resisting his military's demands for exploitable technology, it feels like this is what Hamilton wanted to write about all along. The last half of this 154 pager redeems it enough to make Weapon From Beyond worth enduring its first half, but there's no denying that this was old-fashioned stuff already when it first appeared almost 50 years ago, a trifle even by genre standards. Still, I can't complain when I only paid a dollar for it. It's worth at least that much.
Posted by Samuel Wilson at 7:13 PM