VINTAGE PAPERBACK OF THE WEEK: Lionel White, THE MERRIWEATHER FILE (1959) 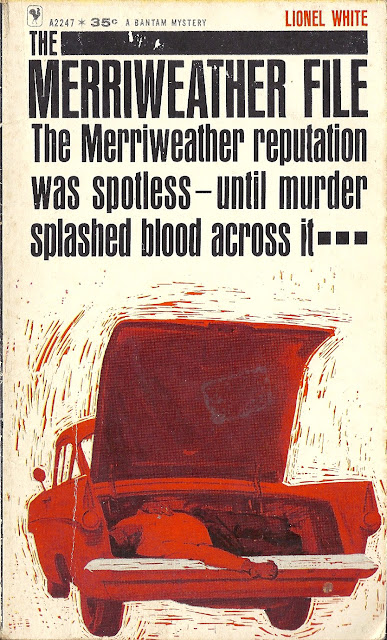 Lionel White is probably best known for his novel Clean Break, which is itself better known as The Killing, the title under which Stanley Kubrick and Jim Thompson filmed their late-noir classic in 1956. A number of White's stories were filmed, including this slight novel, which probably lost little in its conversion into an episode of Thriller, the early Sixties anthology series hosted by Boris Karloff. My edition is from September 1961 so Merriweather may have been reissued to benefit from interest created by the TV show.  At 121 pages it's one of the shortest paperback novels I've read and you can sense that White struggled to get it to novel length. The first-person narration gets repetitive at times as the narrator tends to recap things in a manner that made me wonder whether this had been a serial first -- apparently not, though. White is considered a master of the caper story -- another novel is called The Big Caper -- but Merriweather is more of a whodunit. The narrator, Howard Yates, is a straitlaced lawyer and recent widower who is drawn into a maelstrom engulfing his friends and neighbors, Charles and Ann Merriweather. They seem normal enough apart from having lost their only child in a freak driveway accident, but one day Ann confides to Howard her belief that someone tried to kill her by asphyxiation one night when Charles wasn't home. The Charles is taken in for questioning when a dead body turns up unexpectedly in the trunk of his car. He has an alibi, based on the estimated time of death, but isn't eager to publicize it. As Howard learns, Charles spent the night of the mystery man's death with another woman. Charles claims not to know the dead man, but Howard learns that Charles' mistress knew him. He grows increasingly convinced that Charles is keeping something from him, and as circumstantial evidence makes the case against Charles more solid -- we learn that the dead man was a gambler and bookie and that Charles had made some big withdrawals from his bank account recently -- Howard becomes convinced that the only way to save Charles' life, still presuming him innocent, is to tell a lie in which Charles did kill the man to rescue Ann from his attack. Ann is willing to perjure herself -- she'd explained earlier that she'd taken sleeping pills and was dead to the world on the crucial night -- on the condition, now that she knows of Charles' infidelity, that he agree to a legal separation. In the end, Charles insists on telling his version of the truth, however hopeless it looks.... 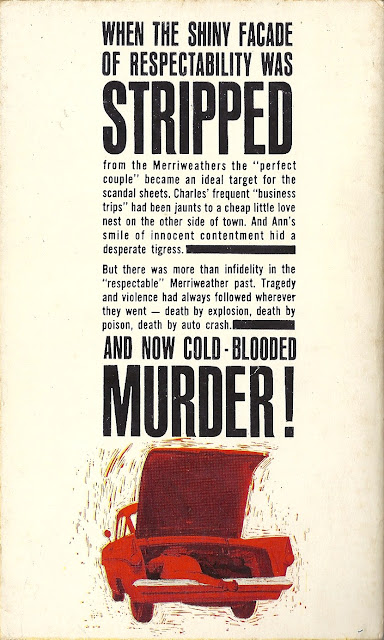 Most people making their way through Merriweather will find themselves torn between two assumptions. They'll either presume that Ann Merriweather is the killer, having lied about taking the pills, or they'll assume that Howard did it and is playing an unreliable narrator, since he often seems too naive to be true. I won't spoil the story any more than it's been spoiled in the last 57 years, but I will warn you that there is more to Charles Merriweather's story than he lets on to his lawyer. Don't confuse my reluctance to spoil the story with a recommendation. It only means that anticipating the big reveal is really the only thrill this trifle can offer. I may call it a mystery but it hardly qualifies as a detective novel, since Howard Yates is one of the worst detectives you'll ever encounter and it's up to someone else to finally explain to us what actually happened, almost in deus ex machina fashion. It's all been buildup for the sort of twist ending you'd expect at the end of a half-hour radio or TV show. The best I can say for Merriweather is that it's very readable despite the narrator's rather stilted manner, and it's over quick. The best I can say for Lionel White is that I've read Clean Break and that book is a classic -- and I'd still be willing to read more of his work in that line.
Posted by Samuel Wilson at 5:13 PM