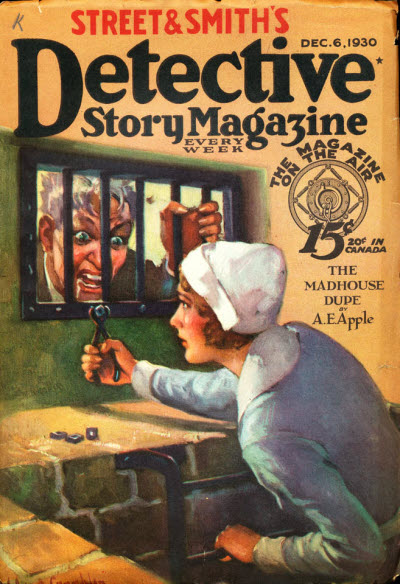 Approximately one year before yesterday's cover, here's a Detective Story woman possibly putting herself in peril. I appreciate the artist's commitment to detail in illustrating the madman's drooling anticipation of freedom, however limited by the size of that window. The author of "The Madhouse Dupe," A. E. Apple, specialized in supercriminals, eventually pitting his two prize specimens, the Asian menace Mr. Chang and the more scrupulous thief Rafferty, against each other in two 1931 stories. Elsewhere this issue, Johnston McCulley's lisping safecracker Thubway Tham borrows the Street & Smith microphone from the cover for "Thubway Tham on the Air," while Charlotte Dockstader, Ronald Everson, Roy W. Hinds, Ray Humphreys, Ainsworth Morgan, Morgan I Tooke and Donald Van Riper contribute stories and Herman Landon continues the serial The Silver Chest. Tham, Humpheys and Van Riper would be the very next week, while Dockstader had been in just last week. A weekly story magazine was a dependable market for the industrious.
Posted by Samuel Wilson at 3:04 PM