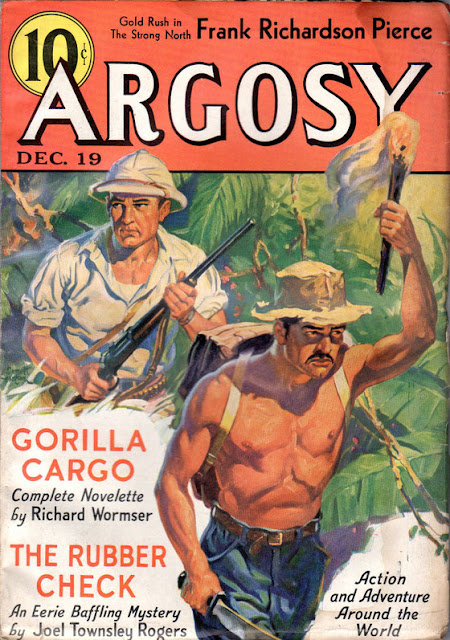 There's no table of contents for this 1936 Argosy in the FictionMags Index, but an eBay seller has helpfully scanned the table of contents from the issue itself. The cover story, "Gorilla Cargo," presumably is part of Richard Wormser's series about entertainment-industry animal hunter Dave McNally. The contents-page synopsis says simpy, "A monkey amok in mid-Atlantic." The serials this week are Lester Dent's Hades (part three of three: "Showdown with the demon of the Arizona caravans"), H. Bedford-Jones' Will o' the Wisp (part four of five: "The Army of France lies mouldering in its tents tonight!") and Eustace L. Adams' The Man With the Painted Smile (part two of four: "A doom ship with a mutinous crew is O'Malley's first command"). Of Joel Townsley Rogers' novelette "The Rubber Check," Argosy says nothing except to challenge readers to "Test your deduction on this baffling, eerie mystery." The short stories are John Hawkins' "Money Player" (golf), Frank Richardson Pierce's "Old Man Terry's River" (Alaska) and William Chamberlain's "Queer Street" ("Where anything happens -- and does!"). In "Argonotes," Bedford-Jones elaborates on his use of the notorious Caligostro in Will o'the Wisp, noting that while the count was a "rank trickster in many ways ... an utterly callous and unscrupulous man capable of the vilest actions," as of December 1936 "the secret of his 'elixir' and his cures has never been solved."
Posted by Samuel Wilson at 12:16 PM