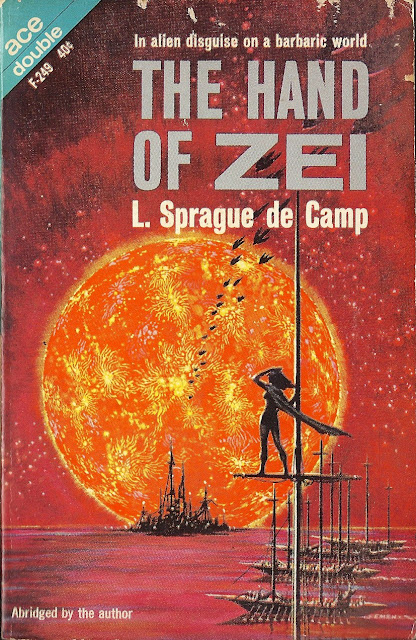 The Ace Double edition of The Hand of Zei is a "moderately abridged" version of the "expanded" second half of L. Sprague de Camp's 1950 Astounding Science Fiction serial of the same title. Publishing this as a separate book from the serial's first half, which took the name The Search for Zei, is like what Hollywood does nowadays with books at the end of a series, to squeeze one extra payday out of a tentpole franchise. I'm sure Avalon Books had a similarly mercenary motive for splitting the original into two books, but I wonder why Ace abridged the second half for its reunion volume. Unless Ace had a smaller page limit for its doubles in the 1960s than in the 1950s, there should have been room for something more substantial than the 108 page Hand of Zei we get here, following the 138 page Search. In this abridged form Hand reads nothing like a standalone novel. It's blatantly just a wrap-up of the story started in Search which, as you'll recall from last week, had Earthman Dirk Barnevelt infiltrating the planet Krishna, disguising himself as an uncomfortably prominent native, to retrieve his lost employer, a celebrity explorer who turns out to have become a mind-controlled pirate. Zei is the crown princess of the matriarchy of Qirib, where females maintain control with an aprhodisiac drug now being smuggled throughout the universe. Admirably uncomfortable with the tradition requiring the queen of Qirib to conclude each annual marriage by devouring her husband, Zei is kidnapped by pirates but rescued by Barnevelt.

In Hand the superstitious crew of Dirk's rescue ship abandons Dirk, Zei and one loyal crewman on an island inhabited by carnivorous man-beasts. These promptly kill the loyal crewman while the two survivors escape via a minimalist raft after Dirk distracts the savages by setting a forest fire, for which he is chided later by his human sidekick, the Polynesian-Australian xenologist George Tangaloa. After this episode the title character of both books recedes into the background until the very end while Dirk becomes commander-in-chief of an international naval expedition against the pirates. At this point de Camp formally introduces a much-mentioned character who had first appeared in an earlier Krishna story: Prince Ferrian, his world's great modernizer, who contributes an oar-propelled aircraft carrier, technology having advanced only sporadically under a wide embargo of Earth technology, to the anti-pirate armada. After a hard fight the pirates sue for peace, but Zei's mother the queen proves treacherous, while some of the pirates, many of whom are male refugees from Qirib, prove honorable despite early attempts to assassinate Dirk. Barnevelt, having reclaimed his employer, wraps up his work on Krishna by leading the pirates in a coup d'etat against the Qirib matriarchy, to the relief of Zei, who has inherited the throne and a responsibility to marry and kill a friend. While this uprising promises the replacement of matriarchy with gender equality, I'm sure some modern readers will find something politically incorrect in Dirk's intervention, especially since de Camp shows the defeated amazons happily fraternizing with the occupying pirates. Dirk's reunion with Zei might not have been so happy, since the author has emphasized the incompatibility of species -- Krishnans appear mammalian but lay eggs -- but in a finishing touch reminiscent of many a hoary old melodrama about whites falling in love in the darker regions, it turns out that Zei is not Krishnan but human, having worn fake antennae since infancy after the old queen secretly adopted her to conceal her own disqualifying barrenness. All things end happily, as I suppose they should in these planetary romances. They're meant as light entertainment and often as exercises in stylish erudition, wordplay illustrating the foreignness of distant cultures. Zei is a fine example of this subgenre, and while an Ace Double isn't the ideal way to present the story the format ultimately shouldn't be held against a fun read like this one.
Posted by Samuel Wilson at 3:13 PM