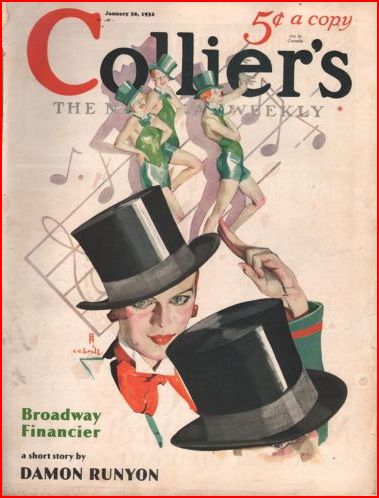 During the 1930s, it seemed that when there wasn't a western serial by Ernest Haycox running in Collier's, there was a serial by Alan LeMay. It's LeMay this time, with part VII of Winter Range. Between these two, the National Weekly has to count as one of the top western magazines of the decade. Meanwhile, a near-perfect illustration of the delicate balance of pulp and slick elements in Collier's is this week's story by Hubert Ravenal Sass. He made a fleeting appearance in Adventure early in his career, back in 1912, and he'd appear more frequently in Blue Book in the 1940s and 1950s. His story this time features his "gentleman buccaneer" Captain Africa, which is just about as pulpy a name as you can imagine. The title of the story is "The Love Pirate." It describes his antagonist, a vamp of the seven seas whom he inevitably wins over. It's more romance than adventure, the action described in a somewhat perfunctory way. It looks like there were no more than four stories in the Captain Africa series, which doesn't really live up to the hero's lurid name. A more experienced pulp veteran in this issue is Hugh McNair Kahler, who showed up in many Street & Smith titles in the Teens and early Twenties, especially in Detective Story. By the thirties he was a pure slickster and his serial The Big Pink is pure comedy that need not detain us. There's another western story this issue besides the LeMay serial. The author of "The Man She Trusted," Henry Meade Williams, had not done any pulp work up to that time, or at least not under his own name, but he would place a story in Detective Story the following year. The fiction star of the issue, however, is Damon Runyan of Guys and Dolls fame. He, too, was a pulp veteran, having place a vignette in Blue Book back in 1907, a story in Short Stories later that year, and three in Adventure's first year of existence. From 1930 forward Runyon was mainly a Collier's man, with Cosmopolitan his next most regular market. I doubt the pulp stuff gave much hint of his later characteristic style. From our perspective, the issue's nonfiction highlight might be Grantland Rice's expose of paid players in college football. You may wonder how much has changed since then. As always, you can browse the whole issue at unz.org.
Posted by Samuel Wilson at 7:55 PM