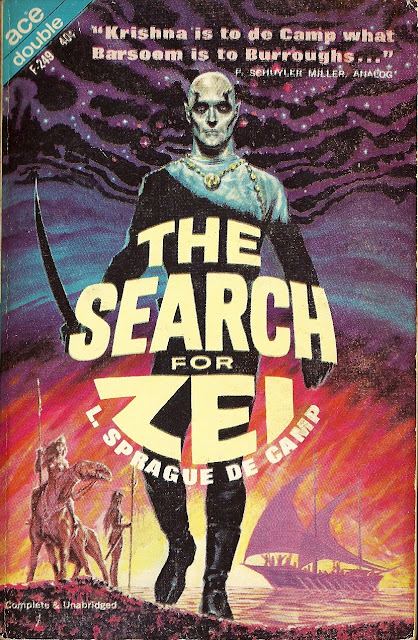 L. Sprague de Camp's The Hand of Zei, a novel in his Viagens Interplanetarias series, exists in at least three different forms. It first appeared as a four-part serial in Astounding Science Fiction (the present Analog) in 1950. The serial was published as two separate books, the second taking the original title, and each with new material by de Camp, in 1962. The following year, Ace published both, somewhat disingenuously, in one of their popular double novel editions, with Hand "moderately abridged" from the expanded version and Search complete and unabridged. The Viagens stories are set in a 22nd century in which Brazil is the dominant power on Earth and humans are exploring the stars. They feature a cosmopolitan cast of human characters and eccentric aliens. The hero of Zei is Dirk Barnevelt, a Dutch-American writer and publicist for Igor Shtein, a celebrity traveler and explorer. Barnevelt is a type common to postwar literature: a sort of corporate drone longing for adventure yet tied to Mom's apron strings until his employers assign him to hunt for the missing Shtein on the planet Krishna, where an aphrodisiac drug giving women dominance over men is becoming a dangerous export to Earth. Dirk's sidekick for the search is George Tangaloa, a Polynesian xenologist who oddly uses a lot of stock Australian slang ("shiela," "dinkum") in his speech. On Krishna they'll be limited to the planet's approximately 19th-century level technology due to a Viagens embargo, though they carry miniature cameras to shoot footage in secret, and while humans trade on the planet they will disguise themselves as natives, the better to roam more widely than humans might. Impractically, Dirk is given the alias of a famous Nyaman warrior, and his challenge will be to live up to the name's reputation as a swashbuckling strategist. Most of the action takes place in the matriarchy of Qirib, where the queen takes a new husband every year after executing and eating his predecessor. Zei is the heir presumptive of Qirib and happily takes a dim view of the custom, in light of Dirk's growing affection for her. The Search portion of the original novel climaxes with Dirk leading a rescue of Zei, who had been kidnapped by pirates who control the realm's supply of the crucial drug. What happens after, I'll find out next week.

This is the first de Camp novel I've read in decades. Growing up, I knew the author, who first appeared in pulp in 1937,  for his involvement in the paperback editions of Robert E. Howard's Conan stories. I read his time-travel story Lest Darkness Fall and some of his collaborations with Fletcher Pratt. None of these really prepared me for Zei. The blurb on the cover compares it to Edgar Rice Burroughs' Martian stories, but in retrospect the more obvious stylistic comparison is with the work of Jack Vance. Arguably, de Camp had Vance's style before Vance did. It's all there in Zei except for Vance's pseudo-erudite footnotes. The rococo speech patterns of alien characters are definitely there, and that sort of word jazz give Zei much of its entertainment value. De Camp writes action and description well enough, but once he gets his protagonists off his somewhat stodgy, gray-flannel-suit Earth, the novel becomes an exercise in style for its own sake that modern readers will have to take or leave. In this sample, Zei's mother the queen introduces her daughter to our hero.

And now, sirs, to your business. You shall deal, not with me, but with my daughter, the Princess Zei, whom you see sitting upon my left. For within a ten-night comes our yearly festival called kashyo, after which I'll abdicate in favor of my dutiful chick. 'Tis meet, therefore, that she should gain experience in bearing burdens such as sit upon our shoulders, before responsibility in very truth descends upon her. Speak.


And that's a mild sample, with conventional grammar and few archaic usages or neologisms. Try this one, the queen's response to Zei inviting our heroes to a Krishnan version of Chinese Checkers:

Ever a creature of whim. Such an invitation before even their bona fides have been confirmed! Oh, have 'em in, since not without dishonor may we withdraw an invitation once extended. But post a guard over the best royal plate. Perchance they'll prove more guestly than the locals, all of whom are either queer or dull, and oftimes both.


While you might question whether it conveys the truly alien or renders all the universe a vast Ruritania, some find it a pleasure to read, myself included. This much of Zei, at least, is an unapologetic romp to de Camp's tuneful, dancing prose. Come back soon to see how the rest goes.

Posted by Samuel Wilson at 3:29 PM