VINTAGE PAPERBACK OF THE WEEK: Frank O'Rourke, THE BIG FIFTY (1955) 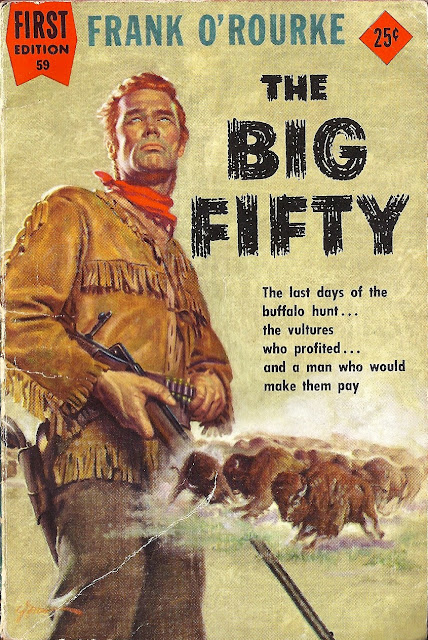 Frank O'Rourke started in the slicks, as far as we can tell, publishing his first story in Collier's in 1945. He became a regular there and in The Saturday Evening Post, and also appeared in Fifties post-pulp publications like Argosy and Bluebook. O'Rourke worked in a variety of his genres but his westerns are probably his most noteworthy writings. If Henry King's film The Bravados (1958) is faithful to O'Rourke's source novel then I want to read that book. Richard Brooks' The Professionals (1966) was also made from a O'Rourke novel.

The Big Fifty is an end-of-the-west story, though the year is only 1878. That's the end for the old buffalo hunters, who've seen the great herds hunted nearly to oblivion. Some hunters have resorted to hide-stealing, and that's where True Benton comes in. I hope that's True for "Truman," but O'Rourke never says so. Benton's been hired by Colonel DeLight (almost invariably "Old Colonel DeLight") to find evidence that the Colonel's son was killed by the arch hide-thief Jan Schmidt. In other words, Big Fifty is a tried-and-true infiltration story in which Benton must win Schmidt's confidence while setting him up for Old Colonel DeLight's vengeance. Fortunately it's more than that. 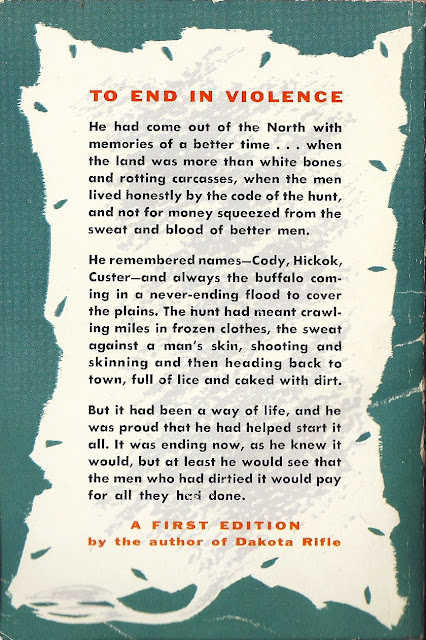 As you might expect from an end-of-the-west story, Big Fifty is more a mood piece than anything else. The tone grows more melancholy as we read along, as Benton comes to like if not admire Schmidt, a charismatic, somewhat honorable villain who is himself conscious of the imminent end of things. As we come to understand, Schmidt has really been playing out his string ever since the end of the Civil War; part of him has been dead for all that time, and he keeps that part buried in a set of sealed boxes he carries with him. Benton learns that Schmidt is not personally guilty of the murder of Old Colonel DeLight's son, but he's inescapably responsible, having given an order to rough up the young man that was carried out overzealously. Benton still feels it his duty to steer Schmidt toward a reckoning, but he doesn't feel good about it. No one really feels good in this story. The novel's romantic quadrangle -- I'm starting to notice this is a fairly common story structure -- does little to lighten to mood. Benton and Old Colonel DeLight's right-hand man Lance McGowan seem destined to be rivals for Celia DeLight, the colonel's daughter, but then we see Lance gradually fall for Schmidt's henchwoman (and lover?) Emma Lu Boudreau as Celia warms to True. Our female leads grow increasingly gloomy as Emma becomes more certain of Schmidt's doom and Celia fears for her father's rapidly declining health. Old Colonel's desire for revenge on Schmidt only seems to be hastening his end. and it becomes a question whether he'll live to see Schmidt caught in Benton's elaborate trap.

As it turns out, Schmidt gets to make a dramatic last stand, confronting the betrayer he thought a friend while keeping his back to an impatient McGowan, poised to act as Old Colonel DeLight's executioner. And Old Colonel lives long enough to hear the news, at least. And I suppose it's a happy ending because True and Lance look to get their girls, but under the circumstances it's one of the most gloriously miserable happy endings you'll ever read. I appreciate that, though, because it gives Big Fifty character. It's not the most action-packed western but O'Rourke's emphasis on character and mood keep you from missing that. I'm willing to read more O'Rourke after this, and fortunately there's plenty more to read.
Posted by Samuel Wilson at 7:12 PM