The Red Wolf of Arabia meets the Assassins of Angora 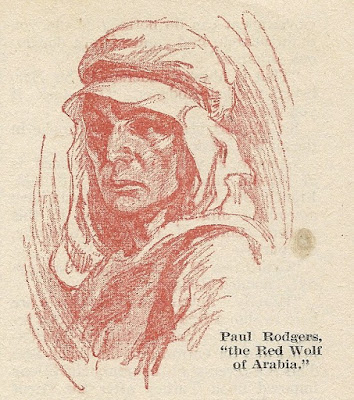 William J. Makin created Paul Rodgers, the "Red Wolf of Arabia," in 1932 for Pearson's, a British magazine. The American monthly pulp Blue Book eventually became the character's home, while also publishing Makin's series about gypsy detective Isaac Heron. With a name like the Red Wolf, you might expect Rodgers to be a warrior out of Robert E. Howard, but his are more suspense than action stories. 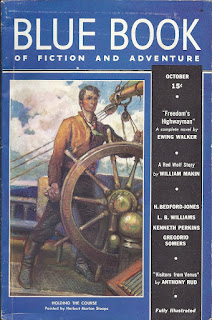 "The Assassins of Angora" (October 1937) begins in Aleppo, the accursed city of 2016, where Rodgers is waiting for a train to Angora, now known as Ankara, the capital of Turkey. Kemal Ataturk, a modernizer and secularist, still rules the republic as an effective dictator following his abolition of the caliphate. The Red Wolf's mission is to join European diplomats in Angora, where a treaty will be signed allowing Turkey to fortify the Dardanelles for the first time since World War I, and to copy the fortification plans for British Intelligence. Boarding the Taurus Express in Aleppo, Rodgers notices three Syrians bringing aboard crates of oranges, and nabs one for a snack. He tries to be sociable with the other real passenger, an aloof "Levantine" schoolmistress with remarkable hands.

They had stretched out for a serviette and revealed long, tapering fingers, beautiful in their slimness, the nails slightly tinted. The fingers of a genius. Or a murderer. 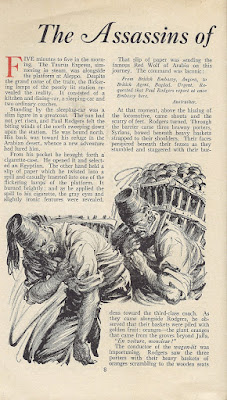 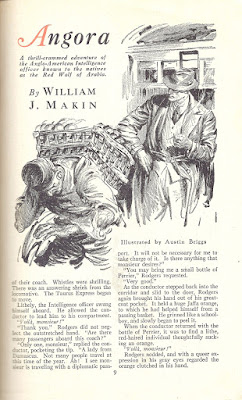 In Angora, Rodgers notices that the three Syrians commute regularly from Aleppo, always with fresh loads of oranges for the school where Lilo Alaya teaches. In a shop he meets one of the country's last eunuchs, "a queer, dying race of history," and finds a photo of Latifa Hanum, Ataturk's ex-wife, which looks oddly familiar to him. He meets Ataturk himself at a jazz party and informs him of something Makin has withheld from readers until now: the Syrians' oranges are hollow and contain gun cartridges, as our hero found out when he bit into his stolen fruit on the train. Rodgers has also deduced that the orange baskets have false bottoms enabling the Syrians to smuggle pistols into Angora. Lilo Alaya's school for modern Turkish girls is the center of some sort of feminist coup plot to avenge Latifa Hanum by killing Ataturk. Many of the student conspirators are at the party, and Ataturk quickly makes arrangements to have them discreetly arrested. When he returns, the Red Wolf brazenly announces that he has stolen the fortification plans from Ataturk's safe. He assures the dictator, however, that "the knowledge of these fortifications will be safer in the files of the British Intelligence than in the files of any other nation," and promises on his government's behalf that the British "favor the fortification as a defense of Turkey against more ambitious nations." Reassured and impressed by Rodgers' courage, Ataturk takes the plans from the safe and asks the Red Wolf to make a closer appraisal for him. As we learn at the end, Rodgers now sees the plans for the first time, having bluffed Ataturk after failing to crack the safe. He uses a micro-camera to snap pictures while studying the plans. Leaving the party, he finds that Lilo Alaya has killed herself. It's a little poignant now to read a story from eighty years ago of intrigue reaching from Syria to Turkey in which Islam figures not at all, in which a modernizing secularist is challenged by a faction that doesn't consider him progressive enough.

Makin continued publishing Red Wolf stories until 1940. A final story appeared in the November 1944 Blue Book, along with an obituary noting the author's death in action while working as a war correspondent in France that summer.
Posted by Samuel Wilson at 8:37 PM