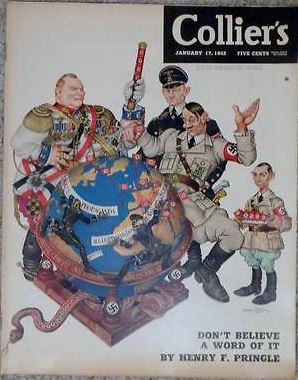 Ernest Haycox was an old Collier's hand by this point, and part eight of his ten-part serial Alder Gulch isn't exactly an event unto itself. But this issue features the one and only appearance in Collier's of Gordon MacCreagh.  A pulp veteran who'd been landing stories in Adventure since 1913, MacCreagh specialized in African stories, though not exclusively, and walked the walk by going on an expedition to Ethiopia for Adventure in 1927. He got a break in 1935 when Italy's invasion of Ethiopia made his expertise newsworthy. MacCreagh published a profile of Haile Selassie for The Saturday Evening Post and sold two more stories to that slickest of slicks the following year. "A Stone in a Sling" almost certainly was written and accepted for publication before Pearl Harbor. It's set in Qantara, a town at the tip of the Sinai Peninsula with strategic importance for the British Empire's war effort. MacCreagh gives us three protagonists: Prudence, a pretty young missionary teacher; "Dingo" Menges, a somewhat ineffectual Australian lieutenant; and Dawud ben Yessieh, a Bedouin boy whose name transliterates, as we're informed in the story's first sentence, as "David son of Jesse." The boy is good with a sling and is getting paid for target practice by his "uncle," a blue-eyed Tuareg from Libya who keeps most of his face veiled.

As MacCreagh explains, "since all good Mohammedans are brothers in Islam, Arab courtesy, imposed upon a boy more strictly than ever teacher imposed a moral precept, designated as uncle any stranger of the faith who sojourned within their tents." Of course, for the 1942 reader "uncle's" blue eyes are the tip-off that the man isn't a Tuareg or Berber at all, but a German whose Arabic is presumably fluent enough to fool all the Arabs in Qantara, with the help of the veil. He has an idea to sabotage Suez Canal traffic by training Dawud to put a sling shot through a ventilator hole of a transport ship, the boy not knowing that the shot is explosive.

Since we're in the slicks a romance plot is important to the story. Prudence has an unspoken crush on Dingo, and Dawud tries to help her out by stealing an "incantation" from his "uncle." The uncle calls his papers incantations, and Dawud notices that the writing resembles the Latin script Prudence keeps trying to teach him. When the boy presents her with one of the incantations, which will supposedly grant her soul's desire, Prudence recognizes the writing as German and the contents as details of a cargo scheduled to go through the Canal. Racing to find Dawud and his "uncle," she manages to distract the boy at the last moment before he lets his lethal shot fly. It still makes a "hell's fury" of flame on the deck, but it won't sink the ship. Dingo only gets himself shot by the Kraut, and Prudence gets herself clobbered trying to save him while the enemy lapses into vaudeville German ("Joost so your devil's woman don't schoot  at me yet, I leaf no weapon."), so it's up to Dawud to save the day, Old Testament style.

Besides this and the Haycox chapter, you also get one of William MacHarg's laconic O'Malley mysteries, an optimistic account of the Air Force's performance in the Philippines so far, a still more optimistic account of American scientists gearing up for war service, a less optimistic account of the Japanese sinking of two British battleships, a report on West Coast wartime measures ("residents displayed no bitterness toward Coast Japanese...") and a warning against Axis-inspired rumors, the "fake news" of the day, as well as one of Arthur Szyk's distinctively grotesque anti-Axis covers. Browse at your leisure by following this link.
Posted by Samuel Wilson at 1:54 PM