"I was to be a first Earth meal for the abomination of the Universe!" 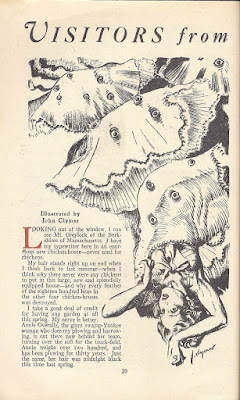 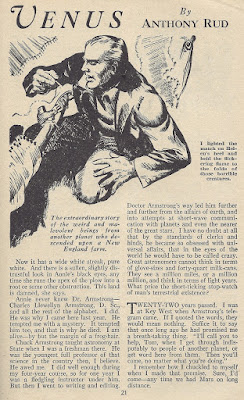 Of the so-called big four general-adventure pulps, Argosy published the most science fiction (or "fantastics" as they were often called in the 1930s, while Adventure probably ran the least, if any. Blue Book ran a fair amount, most notably Wylie and Balmer's When Worlds Collide and its sequel but also quite a bit from Nelson Bond and others in the 1940s. Anthony M. Rud was no sci-fi specialist. The onetime editor of Adventure had no specialty that I can see, though he published detective stories about Jigger Masters throughout his career. Rud's "Visitors from Venus" from the October 1937 Blue Book is really more horror than science fiction. It's horror of the "Look how horrified I am!" sort, heavy on not only the exclamation points but also whole paragraphs of italics in case readers might miss the urgency of an alien invasion.

Tom, our narrator, recalls events from the previous year from a converted chicken house in the Berkshires of Massachusetts, on a farm where 1,800 hens died in the events to be narrated, and where Annie Overalls the husky handywoman says, "This land is damned." It was damned by the naivete of Tom's astronomy mentor, Dr. Armstrong, who called him to New England to help unearth a spaceship from Venus that crashed into Ranger Mountain. From his observatory in Arizona Armstrong had been in contact with Venus, and specifically "Ooloo, the highest-powered of six message-sending stations," for several years. It was often a one-way conversation. "They never thank me," he complains, "They always ask more questions. They never answer the questions I ask -- or only partly. I -- well, to be frank, Tom, they have me worried. I fear they have no souls."

Armstrong keeps digging just the same, and as they unearth the vessel a "disintegration mechanism" activated by contact with air breaks down the vehicle's protective shell. A little more foreshadowing is in order. With hindsight, Tom knows that "more than 200,000 loathsome things were waiting down there -- held by a high pressure of indrawn breath, in that queerly constructed cylinder below ground. Waiting to destroy me, the Doctor, Helen, Mrs. Kramer, Annie Overalls, the half-witted Ranny and every other human being and living thing on the face of Mother Earth!" (emphasis in original)

The Venusians are sort of freeze dried until released, then forming "floating amber-colored balloons" that quickly turn predatory, attacking en masse and smothering people before settling down for dinner. "Oh, God, i was insane then for a time myself!" Tom recalls, "Those damned things were alive! They had big spots like bull's-eyes, that stared unwinkingly at me! Seven eyes apiece! I shrieked and tried to run."

Armstrong is killed and Annie Overalls scarred by the aliens, but like any proper monster they prove vulnerable to fire, as Tom discovers when he reaches desperately for a cigarette lighter as his only tool of defense. If that didn't work, "I was to be a first Earth meal for the abomination of the Universe!" Instead, some other unfortunates are the first meal before Tom can get a big enough fire going to wipe out the invaders. Later, he learns, Armstrong's old correspondents from Ooloo threw a hissy fit over what happened and informed the doctor's assistant in Arizona that they won't talk to Earth any more. I think the assistant was going to kill himself anyway to close the story, after what had happened to Earth, but that couldn't have helped much. In the end, "Visitors" is no more than an exercise in hysteria that looks cheesily out of place in the relatively upscale pulp confines of Blue Book. In fact, it was advertised on the cover, presumably because Rud had some prestige with pulp readers. And to be fair, I've read some Rud stories that I've liked. But "Visitors" is the sort of story that gave pulp a bad name.
Posted by Samuel Wilson at 4:27 PM