VINTAGE PAPERBACK OF THE WEEK: Dan Cushman, THE FORBIDDEN LAND (1958) 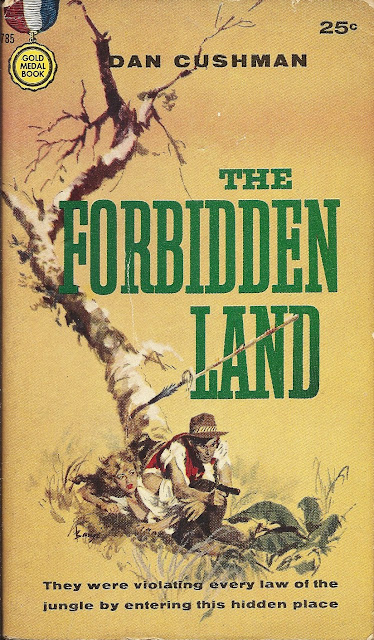 Dan Cushman made his first sale to Fiction House in 1940, but it didn't see print until a 1943 issue of North-West Romances. The Fiction House pulps remained his most dependable market throughout the 1940s, though he broke into the slicks early with a 1945 Esquire story. If Cushman is known today it's for his westerns, including the modern-day Indian story Stay Away, Joe, which was his biggest success. That novel became a Book of the Month Club selection, a Broadway musical, and an Elvis Presley film reputed to be among his worst. Cushman lived to see it widely repudiated for its supposed patronizing attitude toward its subjects. While the western was his main genre, Cushman also became a mainstay of Fiction House's Jungle Stories, and Altus Press has collected his Armless O'Neil stories for that magazine. As the pulps died and paperback originals flourished Cushman continued to write exotic tales of Africa and the South Seas, including a 1958 Fawcett Gold Medal novel that barely merits a mention in Brent D. McCann's master's-thesis biography of the author. McCann -- and, presumably, Cushman himself, whom McCann interviewed extensively -- dismissed The Forbidden Land as "light" fiction, and that's probably being generous. I've read some good Cushman western stories, including one of his Pecos Kid tales for the short-lived Popular Publications pulp of that name, but he pretty much phoned in Forbidden Land. 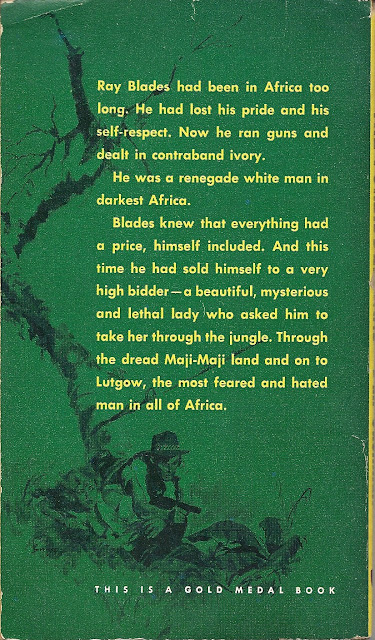 Cushman wrote his exotics with little or no first-hand experience of their settings, and while the Mau Mau uprising in Kenya is mentioned, and a "Maji-Maji" menace dating back to early 20th century Tanzania is invoked on the back cover, Forbidden Land really isn't about Africa at all. Africa serves the purpose it did most of the time in Jungle Stories, as a lawless, amoral setting for black savagery or white depravity, depending on the author. Cushman opts for white depravity. At first Forbidden Land reads like something more conventional. Our protagonist, Ray Blades, deals in contraband ivory and guns for the Maji-Maji, but the novel quickly stops being about smuggling and native uprisings once Blades is mistaken for an old acquaintance, Fenton, who is involved in a bizarre conspiracy. Someone got the brilliant idea to turn part of Mozambique into South Israel, hoping to make money off Jewish settlers who found Palestine too crowded, violent, or morally troubling a place to make homes in. The plan quickly went south, with the original pioneers and investors held as hostages by "Lutgow, the most feared and hated man in all of Africa." Lutgow is German by birth but was raised by an English stepfather after World War I. He talks in a vaguely Germanic sentence structure but we're told that he only knows about 200 words of his native language. He runs a big plantation in Mozambique but his main profession seems to be mad scientist.

He captured this gorilla in the cold forest and the natives hauled him down in a cage on rollers. It took them two weeks. Then, in secret, behind a stockade, Lutgow tried to interest that beast in a native girl. But the beast struck her and killed her. It's hard to excuse a thing like that, except he did it for science. He had some theory about the Neanderthal man....Not to work his fields did he sacrifie this poor native girl. But to prove that a species could be evolved backward as well as forward, A super race, yes! A race with not only intelligence, but the bodies and physical strength to go with it.


Keep up, please: we achieve a super race by evolving man backward. Lutgow exemplifies this himself by building up his body to match his super genius, proving his strength by killing men with his bare hands. It looks like Cushman only interested himself in the story by cultivating a creepy homoerotic environment in Lutgow's compound. One of the villain's flunkies is Avalos "a large, smooth, handsome young man, a Turk perhaps, or a Turk-Levantine....He had a fine body, well-displayed by his sheer shirt and trousers, but he had a small, womanish mouth. In a way he reminded Blades of a picture he had seen in the Illustrated London News of the man who had just won the title of Mr. America." Inevitably Blades has to slug this perfumed fellow, and Lutgow recognizes him ultimately as a worthy adversary -- worthy of bare-handed combat to the death -- because only he had stood up to Avalos. "What a man you are!" the villain exclaims. The novel's climax is the inevitable single combat between Blades and Lutgow, but Cushman denies us the pulpy satisfaction of the hero breaking the villain with his hands. Instead, he has Blades prove his dominance by commanding one of Lutgow's servants to finish off his wounded master. Then he gets the girl, the daughter of one of the captive Jews whose husband was one of Lutgow's flunkies. It's 152 pages long and the first couple of chapters are total waste, as if Cushman started with one story in mind but got tired of it. The prose is mostly lifeless, the descriptions dull, and it has only the peculiar features I've mentioned to recommend it, if that's the word. I have a Cushman western on my reading list for later this year, and I feel certain it will be better than this. It would be hard not to be.
Posted by Samuel Wilson at 3:42 PM