Death is a White Goddess 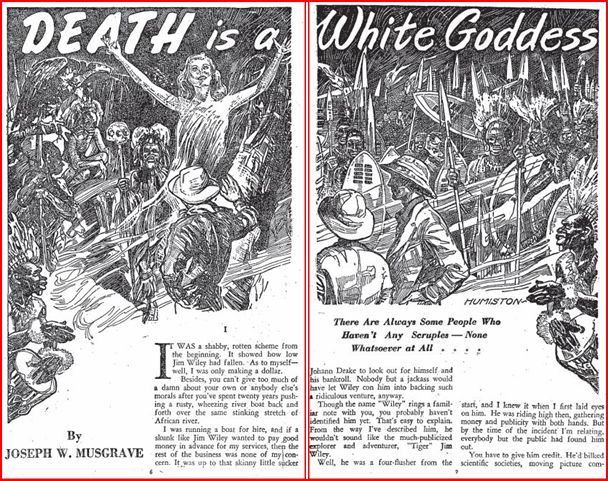 It made quite an exciting story," Joseph W. Musgrave's novella closes, "the romance of two government agents who fell in love while on a dangerous mission among Congo gun runners." In fact, Musgrave's "Death is a White Goddess" (Short Stories, February 10, 1949) is fairly exciting, but the irony of that closing observation is that Musgrave told the story from the point of view of one of the gun runners. Musgrave wrote only a handful of pulp stories during the late 1940s and early 1950s, but "Goddess" proves him adept at manipulating pulp tropes and expectations. Almost to the end, you expect his narrator to redeem himself and win the leading lady of the piece, but he proves bracingly irredeemable. Dirk Morris has the only boat on an African river, as well as a special relationship with a powerful local chief, and so Tiger Jim Wiley, a has-been celebrity explorer, makes him a partner in a pulpy sort of grift. He's enticed some rich ninny with tales of a white woman raised in the jungle and worshiped as a goddess by the black tribes, and the ninny is paying for an expedition to find her. Dirk's role in the charade is to present the mark with a photo of the goddess in her jungle habitat, as confirmation of Wiley's stories. The picture was posed near Port Nairobi, and the plan is to plant the woman in the photograph, a bar girl who's run away from a stereotypical piggish German, in the wild for the ninny to find. To do this, Wiley needs the chief's permission, which only Dirk can secure. The chief drives a hard bargain for the humiliation his tribe will endure pretending to worship a white woman. He wants a thousand guns, and he has a heap of diamonds to pay for them. Our protagonists become gun runners in short order, buying them from the German and keeping their extra cargo secret from the ninny, a frail fitness buff who seems likely to collapse after one day on safari but does calisthenics the next morning, but not from Wiley's head bearer, who seems too clever to be trustworthy. As things develop, almost everyone in the story is playing a double game, while our gun runners prove themselves Africa's prize saps. All the while you expect Dirk to have a change of heart, but as you near the end you understand that what you might have taken to be Joseph Musgrave's racism as a writer is actually Dirk Morris's vile racism as a character. That's not to say that "Goddess" isn't racist, however. It shows no real knowledge of Africa and a stock witch doctor becomes one of the villains. At the same time, Musgrave invests the long-suffering (and as we learn, doomed) chief with a sense of put-upon honor, and in many small ways he shows that the blacks aren't as stupid as the gun runners assume. It's a very hard-boiled story and the sort of thing you might have seen in paperback rather than pulp at this time, though the revelation of the cynical bar girl as an undercover government agent seems a little too goody-good to be true. It's good enough to make me regret that Musgrave didn't write as much as he did. Check it out for yourself at unz.org.
Posted by Samuel Wilson at 7:45 PM