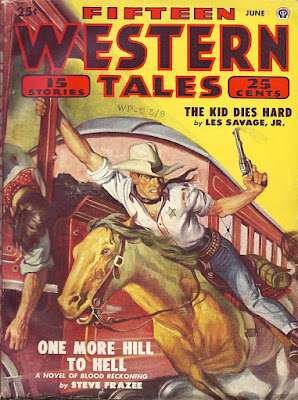 Fifteen Western Tales was one of Popular Publication's most tenacious pulp titles. That title was always a little deceptive, since non-fiction features and monthly department counted toward the 15-tale total. It began as a bimonthly in 1941 and was promoted to monthly late in 1945. It was one of the last pulps to run serials. Its very last multi-part story was a two-parter by L. P. Holmes that begins in this June 1950 issue. Fifteen resumed a bimonthly schedule in 1951. When Popular shut down its pulp line in the summer of 1954, it kept Fifteen alive, converting it to magazine format as it had done with Adventure the previous year. In that format, it lasted, still bimonthly, to the end of 1955. The effort to keep it alive suggests that Fifteen must have been one of the company's most popular titles, if not its most popular western. The promise of quantity probably had something to do with that, as the similar continuation of Fifteen Detective Stories suggests. 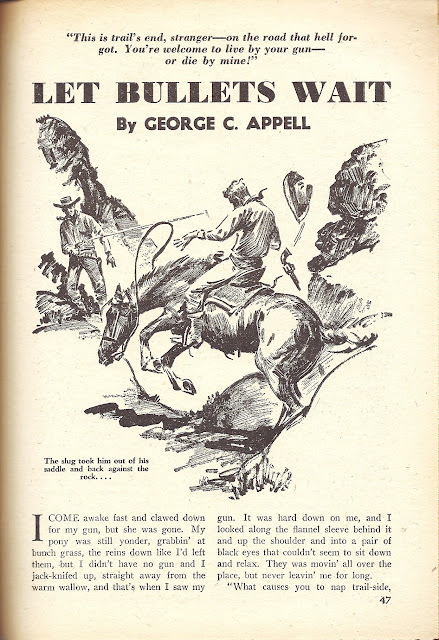 I'll be reviewing more stories from June 1950 but I'll start off with a short story in mid-issue. It's the first first-person story I've read from George C. Appell, narrated in the semi-literate style meant to evoke someone telling a story rather than writing it. "I come awake fast and clawed for my gun, but she was gone," it opens. Our narrator has been caught by surprise by a cattle rustler, one of two. The first, Steckfus, is a mean character, but the other, Side, is someone the narrator "could take to." A friendlier sort, Side doesn't carry a gun, earning his nickname by riding side-hung. Still, they're rustlers both, and once the narrator says, "They gave me the play" you can anticipate the finish. He's either a marshal, a deputy or a range detective, pretending to be a drifter, probably in the hope of meeting these very men. Recruited by Side, he sticks with the pair to find out where they're stashing cattle, and along the way Side rescues him from a stampeding herd. Side wants out of rustling and plans of opening an equipment store and marrying a girl. He's the sort of sympathetic outlaw you perhaps were seeing more often in these latter days of pulp, and the hints of the narrator's true mission make his admissions of friendship for Red ominously poignant.  Finally the rustlers get caught in an ambush the narrator apparently didn't anticipate, since he has to run for his life with the other two. Side doesn't make it while Steckfus saves himself. The narrator tracks Steckfus down to his lair and, ever honorable, gives Steckfus a chance to draw, "somethin' he never gave Side." He has no interest in taking Steckfus alive because "You can't save the life of the man who ran out on your friend." This short story (6.5 pages) closes on a note of regret. "I'll miss him sorely," the narrator says, reminding us again that pulp fiction wasn't always a matter of black and white.
Posted by Samuel Wilson at 6:36 PM