Collier's (1888-1957) was the great rival of The Saturday Evening Post among large-sized general interest magazines printed on slick paper with color illustrations. Known at the turn of the 20th century for its muckraking exposes of American business and politics, Collier's ("The National Weekly") soon would become a genre-fiction trailblazer as the American home of Arthur Conan Doyle's Sherlock Holmes and Sax Rohmer's Fu Manchu. Starting in 1927, when Zane Grey became a regular contributor, Collier's attracted many of the top western writers of the day, most notably Alan LeMay and Ernest Haycox, as they graduated from the pulp ranks. Pick up any given issue of Collier's and you're likely to find someone who'd risen from the pulps or was still publishing there. The slicks were a different kind of market, of course, and it was often assumed that pulp veterans would tone down their work in deference to female readers. I've read some rather violent Collier's stories that belie that assumption, but it's indisputable that some pulp masters, e.g. Frederick Nebel, often neutered themselves in the name of respectability. Of course, many Collier's stories will seem no less politically incorrect in their stereotypes and prejudices than pulp tales, and in Roark Bradford they had a specialist in popular fiction's most retroactively embarrassing genre, comic tales about black people in which the characters talk in cartoon dialect. Many Collier's stories became movies, the short story format being perhaps the ideal raw material for Hollywood screenwriters, though the magazine's serials also proved movie-ready, very late examples including Jack Finney's The Body Snatchers from 1954 and  Fred Gipson's Old Yeller from 1956. The best-known short-story movie source is probably Haycox's "Stage to Lordsburg," the basis of John Ford's Stagecoach, which appeared in the same April 10, 1937 issue as Hagar Wilde's "Bringing Up Baby," the source of Howard Hawks' screwball comedy classic. That same issue has short stories by pulp stars Harold Lamb and Sidney Herschel Small, and the opening installment of a Max Brand serial. That's what I'm talking about.

When I discovered the unz.org trove of magazine scans I pounced on Collier's first. I have a handful of issue in my own collection, bought decades ago when probably every town had a used book store where you could buy these, or the Post, or Life and Look, for a dollar an issue. I loved these old magazines as much for their advertisements -- they transported you back to another time, just before my own, perhaps more effectively than anything else -- as the articles, and I confess that back then I didn't care that much for the fiction in Collier's or the Post. By my old standards the unz Collier's collection is terribly disappointing, because all the interior pages were scanned in black and white. But by this time I'd read through many of the pulp stories in the massive Black Lizard Big Book collections, and I was thrilled to find similar stuff in the National Weekly. I hope to share that sense of discovery with readers of True Pulp Fiction through this new regular (though not daily) feature, in which we follow the fortunes of pulp writers in one of the great American magazines. 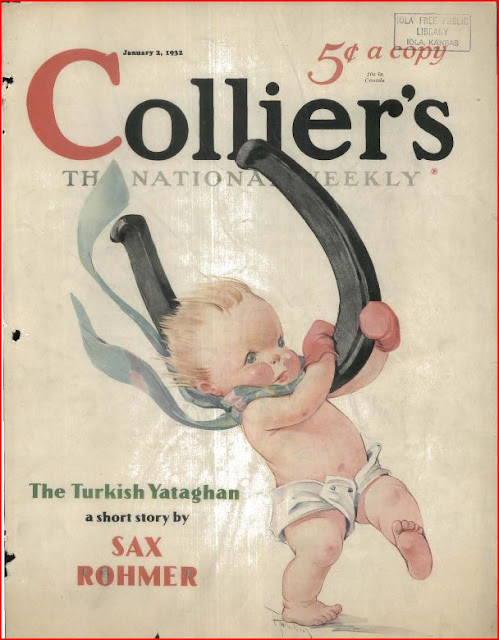 For example, on this day in Collier's in 1932, Sax Rohmer gets star billing. "The Turkish Yataghan" is a Rohmer rarity: a Nayland Smith story in which Fu Manchu's nemesis has something else to do besides thwarting the devil doctor. Apparently Rohmer wrote only three such stories in his long career, but that isn't really surprising, since most readers, presumably, were more interested in the bad guy. 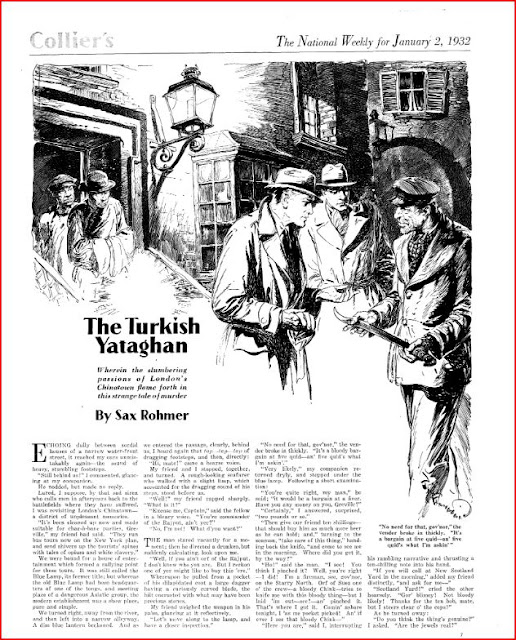 Rohmer technically isn't a pulp writer but Alan LeMay and Albert Richard Wetjen were. LeMay, the future author of The Searchers, broke into Collier's in 1929. He was still publishing in pulp in 1932, though he would adopt the pseudonym Alan M. Emley lest he dilute his brand by appearing too much there. LeMay had graduated to Collier's serials in 1931. Winter Range, beginning back on December 19, 1931, was his second. Wetjen, an Australian sea story specialist, broke into pulp in 1922 and had been appearing in Collier's since 1923. In pulp Wetjen specialized in violent stories of tough sea captains. He created one such for Collier's, and Wallaby Jim eventually made it to the movies, but Wetjen provided Collier's with a somewhat wider range of stories, usually focusing on clashing personalities under adversity. Along with Sidney Herschel Small, Wetjen is one of my favorite writers discovered through Collier's, and you'll probably see a lot of him in this feature, starting with this issue's "Masters of the Craft." 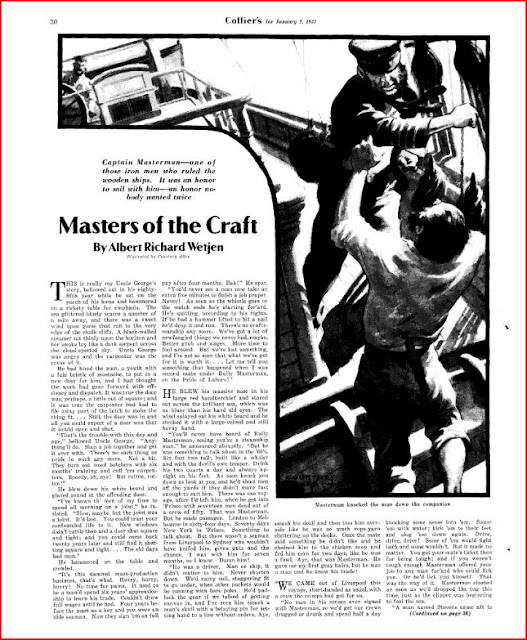 For trivia's sake, this issue continues a serial biography of Josef Stalin by Lev Nussimbaum writing under the pseudonym Essad Bey and a profile by John B. Kennedy of Edward G. Robinson, who had hit big in Little Caesar the previous year. Legendary sportswriter Grantland Rice makes some predictions for 1932 and an editorial predicts, in the midst of Depression, that "good times are actually close at hand."It was certainly nice to think so.

Posted by Samuel Wilson at 6:34 PM