"I make a specialty of getting up;" Robert E. Howard's Steve Costigan 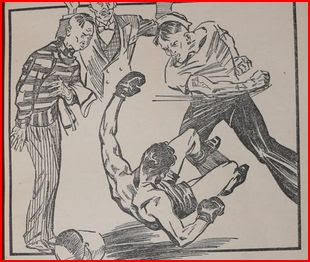 Robert E. Howard's Conan stories were probably the first true pulp fiction I read, and for a while Conan defined pulp for me. I was a big sword and sorcery fan in high school, but only occasionally dabbled in Howard's other genres. The recent illustrated Del Rey editions of Howard's collected works got me interested in a wider range of his work. Unfortunately, Del Rey never put together a volume of Howard's boxing stories, though the University of Nebraska's Bison Press did. The two Del Rey sampler volumes had representative boxing works, but it took me 99 cents, the cost of a cheapo e-book, to go the distance with Howard's fistic fiction. I now rank Sailor Steve Costigan as one of my favorite Howard characters, and I'd argue that he's exceptional among Howard heroes for a certain modesty, if not also a certain masochism. His stories are also pretty funny for pulp fiction.

Costigan is a heavyweight by the standards of his time, standing an even six feet and weighing in at a consistent 190 pounds. He's the champion of his ship, the Sea Girl, and a more or less uncrowned champion of the Pacific Ocean, but he'll never be more than that. Steve knows his limitations, admitting at least once that the more scientific heavyweights in big-time professional boxing could beat him, though on any given day, as Howard often shows, Costigan can outslug or at least outlast the top fighters. You can infer that Costigan might be limited as a championship contender by the time limits of sanctioned fights. Ten or fifteen rounds might not be enough time to wear down the better opponents, though Steve often rises to the occasion when the plot imposes a time limit on him. In his own milieu, Costigan fights are ferocious battles of attrition. Howard excels at finding new ways to describe -- or more correctly, to have Costigan describe -- the punishment he endures from opponents both brutal and skillful. Here's a sample from the story I've read most recently, "The Slugger's Game" (1934).

Jerusha! It wasn't like being hit by a human being. I felt like a fire-works factory hadst exploded in my skull. I seen comets and meteors and sky-rockets, and somebody was trying to count the stars as they flew past. Then things cleared up a little bit, and I realized it was the referee which was counting, and he was counting over me. I was on my belly on the resin, and bells seemed to be ringing all over the house. I could'st hardly hear the referee for 'em, but he said, 'Nine!' so I riz. That's a habit of mine. I make a specialty of getting up. I have got up off the floor of rings from Galveston to Shanghai.


If other Howard stories are fantasies of overwhelming strength, the Costigan tales may be Howard paying himself back by imagining himself on the receiving end of terrific beatings, albeit with a redeeming good humor. There's definitely a better balance of humor and violence with these tales than in Howard's comic westerns, for instance.

Sailor Steve narrates his own adventures in conversational, often ungrammatical style (see also Frank Richardson Pierce's No-Shirt McGee) that might put you in mind of Popeye, who first appeared in the Thimble Theater comic strip a few months before Costigan's 1929 debut in Fiction House's Fight Stories. Some Costigan stories are written in a different style (e.g. 1931's "The Sign of the Snake"), but that's because they weren't written as Costigans, but were changed by editors to feature the more recognizable name. Costigan often ends up in fights indirectly, sometimes manipulated into them, sometimes needing to fight to raise quick money. Steve is a sucker for smooth talk, especially from femmes fatales playing on his sympathies. But his fists get him out of every predicament, or else the fangs of his beloved bulldog Mike, who can put a gorilla on the run, do the trick. Costigan battles fighters of all races, though Howard misses the opportunity, due to western ignorance of Chinese martial arts up to a very late point, to have Sailor Steve go up against a kung fu master. Howard's treatment of Asia is typical for Thirties pulp, which means he meets Asians of all types, some good, some bad, probably all stereotyped in some way or another but not as badly as they could be. The fact that Costigan is something of a knucklehead himself mitigates Howard's portrayal of other races somewhat, and he can be appreciated as an Ugly American running amok in the Pacific without really doing any harm to anyone who doesn't deserve it. The Costigan stories -- Howard wrote more about Sailor Steve, I'm told, than about any character other than Conan -- are too good natured for anyone to hold a grudge against them, and for all their violence their good nature might make them among Howard's most accessible adventures. They're definitely among his most underrated and entertaining.
Posted by Samuel Wilson at 7:36 PM