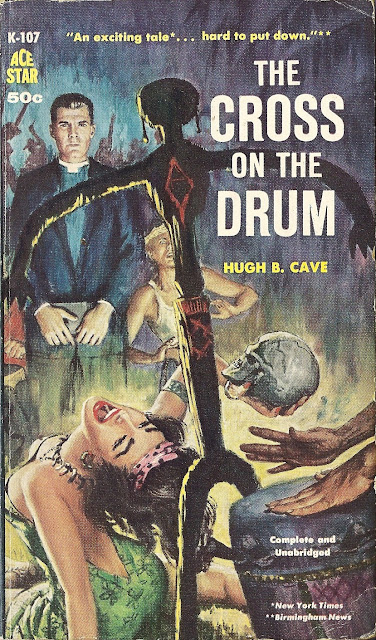 Cave's publishing career lasted nine decades, his first stories appearing when he was 19, in 1929, his last appearing in the 21st century. By the 1950s, with the pulps dying around him, he graduated smoothly to the slicks, only to be re-embraced by pulp fans in his old age, long after his main slick markets had vanished. For a time he was a mainstream author, known both for a nonfiction study of Haiti and for The Cross on the Drum, reportedly a best-seller and presumably based on his personal experience of Caribbean life. This is a mainstream novel, first published in hardcover, and in certain respects a conscious repudiation of pulp tropes. It addresses one of the classic pulp subjects, the clash of cultures, but takes an un-pulp approach to it. 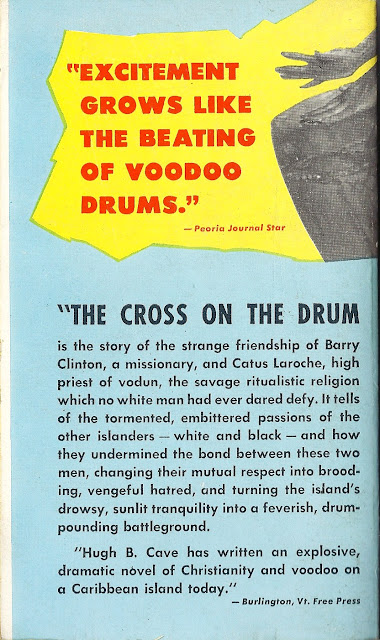 Cave himself probably wrote pulp stories treating voodoo as a horror, and if he didn't many others writers did. Many more have used the generic "witch doctor" as the villain of stories in many settings, representing the unreasoning, reactionary superstition of primitive people.  Fanatic or fraud, this type is usually shown selfishly if not cynically exploiting his people's credulity for his own benefit. In The Cross Cave departs from that formula by stressing the similarities between his houngan, Catus Laroche, and his Christian missionary, Barry Clinton. For both men, religion is less a matter of dogma than service. Each persists in his beliefs and practices in spite of growing doubts because both want to help the people of Isle du Vent. Each is painfully aware of how limited his ability is to materially help the desperately poor people of the island. Each is also guardedly critical of the other's faith while withholding judgment on each other as individuals. Catus zeros in on the apparent absurdities of the Gospel while Barry finds a weak spot in the apparent indifference of the loa to the material or spiritual well-being of the people they possess and take sacrifice from. It's a measure of Barry's own doubt, however, that he can't simply dismiss all the behaviors of possessed people as mere shamming. In any event, it's not really a high priority for Barry to denounce vodun (Cave's usage) or the loa. Recognizing how vodun had incorporated Catholic saint worship, he'd be satisfied to have Catus's people add Jesus to their pantheon in order to learn Jesus's moral lessons. In turn, Catus wants to learn more about Christianity, if only to understand his antagonists better, but he really appreciates what Barry is able to accomplish simply as a glorified medic. While most of the novel is told from Barry's point of view, Cave lets us into Catus's head often enough for us to understand that these holy men are basically two of a kind.

Barry and Catus probably would work out a modus vivendi if not for the rest of the plot. An ambitious native, Pradon Beliard, tries to play the two off each other to advance his own interests. The island's white plantation boss, Lemke, backs Beliard's efforts to subvert Barry's mission, growing increasingly hostile as he suspects his estranged wife Alma of being attracted to him. Catus's sister Micheline has had an affair with Lemke and has the hots for Barry, despite Catus' hot hostility to the idea of her sleeping with white men. When Barry definitively spurns Micheline -- he actually has fallen for Alma -- she joins forces with Beliard with some explosive gossip. She'd been privy to a confidential conversation between Barry and Catus after the death of a village girl, when Barry had explained that the girl could have survived had Catus brought the girl to him for modern medicine. Barry promised to keep this secret in order not to undermine Catus's position in his community, but Micheline now blabs this to Beliard, so he can say that Barry's been telling the story all over. Worse, she tells Beliard that the child she's carrying is Barry's, when it's actually Lemke's. Once Catus appears convinced of this double betrayal, both Barry's mission and his life are in jeopardy....

When I said that Cross on the Drum was in some ways a conscious repudiation of pulp, I had in mind at least two scenes when Barry compares his situation to pop culture cliches. Micheline's disheveled seduction attempt, following their survival of a boat wreck, reminds him of scenes from numerous "South Sea" movies. Later, after days of menacing drumming abruptly stop, and one of Barry's few remaining friends fears the worst, the missionary reflects that this "isn't one of those movies in which the beleaguered  explorers crouch in the jungle, surrounded by howling savages." Cave underscores this point by having Barry and Catus eventually settle things like reasonable men, but before that can happen the story depends on two classic coups de pulp. First, Barry's faithful housekeeper poisons her nephew Pradon Beliard -- non-lethally, natch -- in order to terrify him into confessing his culpability in all the novel's conspiracies. Second, after the housekeeper has saved Barry from eating a poisoned chicken, the missionary decides to play on the islanders' superstition and awe them into halting any attack. He has the word spread that he actually did die by poisoning, so that his appearance outside his church as the islanders converge upon it can look miraculous. He makes a point, however, of promising Catus after the fact that he'll tell the people the truth at his next service. His ultimate victory, Cave tells us, comes when Catus calls him mon frere rather than mon Pere. The novel closes on a note of peaceful coexistence, with the spiritual development of both divines to be continued. Despite the melodramatic climax, The Cross on the Drum often succeeds in what I take to be Cave's goal of transcending pulp formulae and the conventions of popular fiction in general while presenting a remarkably non-judgmental comparison of Christianity and vodun. I wouldn't say it really rises to the level of literature, but it's an earnestly entertaining, briskly plotted story that held my interest for all its almost 300 paperback pages. It may not so much transcend pulp as illustrate how pulp fiction could evolve as a pulp author learned more about the world and its people.

Posted by Samuel Wilson at 5:13 PM