Joseph Chadwick was a prolific pulp writer during the 1940s and 1950s. His "Girl For No Man's Land" was the lead novelette in the 1953 First August Number of Ranch Romances. At 37 dense pages it's a pretty substantial piece of work, and this length gives us a better idea of the balance writers tried to strike between romance and mayhem in this most popular of western pulps. 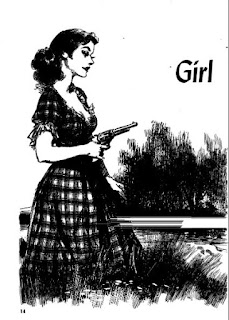 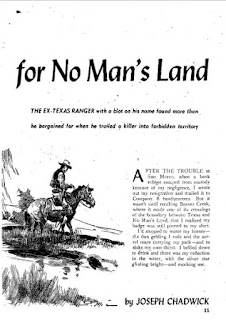 Jim Bannister has resigned from the Texas Rangers to conduct a personal manhunt for Matt Duane, an escaped convict he more or less let escape. Duane was the only member of an outlaw gang to be captured after a robbery in which Bannister's mentor was killed. The search takes him into "No Man's Land," aka the "Neutral Strip," a piece of "forgotten" territory bordering five states. Bannister expects to meet strange characters here, but the real surprise is when he stumbles upon a woman bathing in a creek. "In all my years as a Ranger, nothing like this had ever happened to me!" he narrates. While he gapes at the spectacle, the woman dives to the bank, finds her rifle and opens fire at him. I bet that happened to him before! This is Bannister's first meeting with Janet Cameron, daughter of a rancher and girlfriend of Matt Duane. Bannister doesn't know that yet at their first more formal meeting, but he suspects that the Camerons know where Duane is and mean to warn him that someone's after him. Chadwick is good at showing his hero's thought processes as Jim tries to decide whether a Mexican ranch hand has been sent to Duane's hideout to warn him, or whether the Mexican was meant to distract him from Duane's presence at the ranch. He confronts Janet a second time and notices that she's got dishes for two in her sink. When Duane finally appears to confirm Jim's suspicions, Janet snatches the gun from Jim's holster to leave him helpless. But she won't let Duane shoot the unarmed man and a melee results

I grabbed at her, and in the darkness I wasn't able to see what I grabbed. I got an armful of girl. She screamed and fought against me, and for a time I had my hands full. I'd never had a woman fight me before, and Janet Cameron's strength surprised me.


You get the feeling that, if anything, this makes Janet more attractive to our manhunter hero. Despite her efforts Bannister reclaims the upper hand, but offers to leave Duane be if he'll rat out his three partners. Duane does this readily while telling Bannister his hard-luck story of oppression by the banks and the big ranchers. Bannister isn't naive about rich folk so he gives Duane some benefit of the doubt. It's not until he's on the trail again, and when he encounters Will Hanks, a cunning drifter he'd met earlier in the story, that he reconsiders why Duane was so ready to rat on his partners. Hanks, who wants a piece of the outlaw bounty, plants the idea in Bannister's head that Duane has all the loot from the robbery hidden someplace. Why else would the other three be looking for Duane, as Hanks has found out? Not to give him his share, certainly; more likely to get theirs. That sends Bannister back to the Cameron ranch, only for Janet to get the drop on him with her rifle. Since this is Ranch Romances, Jim finds himself addressing Janet as "Honey," though this "surprised me as much as it did her." He keeps trying to smooth-talk her into dropping her guard, but she's unimpressed by his abrupt confession that "You've got me crazy in love with you." Planting doubts in her mind about Duane proves more effective, but disarming her only starts the next round.

I threw the rifle aside and went after her, across a comfortably furnished parlor to a desk at its far end. She jerked open a drawer and grabbed out a six-shooter. I had to strike her across the wrist with the edge of my hand in a nasty chopping blow. She shrieked with pain, dropped the revolver. I stooped to pick it up and she caught me with both hands at the shoulders and shoved hard. I fell onto my side, rolled over, scrambled up just in time to keep her from getting the gun. I caught her across the waist, and it was like taking hold of a cougar. She fought me as she had the other night, with wild fury. I picked her up, carried her squirming fiercely to a sofa, dumped her onto it. When she tried to get off it, I pinned her down by the shoulders.

I bent over and kissed her.

My lips touching her mouth did what force couldn't have done...


And so the tide turns. Janet's still in denial, insisting that she means to marry Tom Duane, but it's only a matter of time before Duane shows his true colors, confirming Bannister and Will Hanks' suspicions. The confirmation comes when the other three outlaws arrive at the ranch looking for Duane and their money. Everyone converges there for the big showdown, including the mercenary Hanks, who decides that the robbery loot is a better prize than any bounty. Bannister understandably takes care of most of the business toward the end, though Janet scores with a pot of freshly boiled coffee in an outlaw's face. Overall, "Girl For No-Man's Land" illustrates how the tone of Ranch Romances stories could turn on a dime from violence to romance, perhaps on the assumption that there was some continuity between the two. It definitely works as a western action story, and compared to what you might read in a "straight" western there's a more urgent tone to the romance scenes that doesn't really compromise the story. I wonder whether there was too much violence in Jim and Janet's encounters for some of the female readership, but I also suspect that the rough-and-ready elements of their courtship were part of Ranch Romances' enduring appeal.
Posted by Samuel Wilson at 4:03 PM