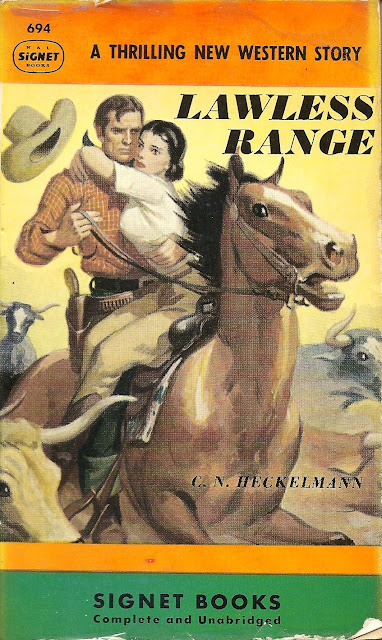 The publishers of this 1948 paperback desperately want you not to think of it as mere pulp fiction. Let's go right to the back cover to see the case they make. 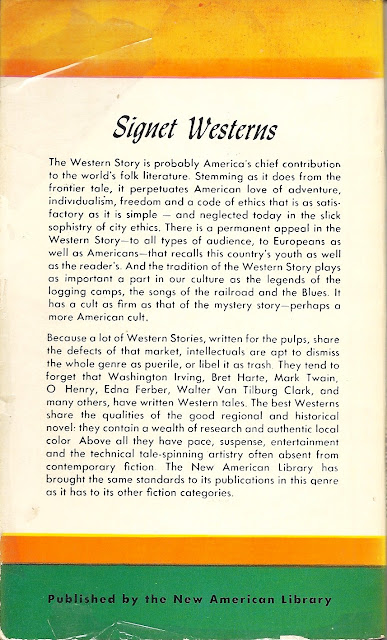 Lawless Range, then, is in the great tradition of Cimarron and The Ox-Bow Incident, or so Signet claims. It is literature of a new kind, as the first-page blurb reiterates: "Lawless Range is typical of the new brand of Western fiction -- literate and yet suspenseful, adult and action-packed." I'll give them "action-packed," but the rest is a load of bull. If this isn't pulp, then I don't know what Signet's copywriter thought pulp was. Is it not pulp if the author doesn't use the embarrassing yuhs and tuhs? Is it literate when two potential lovers debate their attraction thusly?

"In my own life I have known few women," he told her, "Perhaps that has been to my disadvantage. In any event it has always been in my mind that when a man kisses a woman, he does so because his intentions are serious, because he regards her as his woman and she accepts him as her man."
Diana's cheeks whitened and that pallor deepened, by contrast, the rich, red line of her mouth. She stepped nearer, suddenly enjoying the uneasy storm behind his slate-gray eyes.
"You're a strange man, Jim," she said, and now her eyes were mocking and inviting him, "Your belief leaves no room for the man and woman who are attracted to each other at first sight and must answer the call of their own nearness because they recognize it as a force bigger than themselves and not to be ignored." She stopped and put her hands on his chest. "Oh, Jim, why are we here talking when --?"


These two had kissed impulsively only a page before. Their almost academic exchange is a typically stilted romantic scene from the novel, though Jim, the hero, will end up with another woman, Sally the virtuous, tough-minded schoolteacher. Their courtship is complicated by the fact that Jim, a federal marshal operating undercover, killed Sally's brother just before the story started. His mission is to discover who's behind a rustling ring, and his refusal to reveal himself makes nearly every male character suspect, since all suspect him of being an outlaw and are hostile to him. It's a standard whodunit with a bunch of red herrings to blur Jim's trail, rather like a Texas Rangers novel with love scenes. The novel is not a paperback original but was first published in the Canadian Sunday-supplement magazine Star Weekly in 1945, and then in hardcover by Arcadia House, a company that specialized in genre fiction for five-and-dime "commuter libraries." I don't think I've read anything by Heckelmann before but I'll be reluctant to try more after this one. Whether Lawless Range is bad pulp or bad literature, merely inept or hopelessly pretentious, it's bad. There are more tin-eared sentences in this 163 page novel than I've seen collected between two covers in some time. Heckelmann writes drama badly and action badly.

Hockett cursed and his wide, stocky frame bowed in a crouch. Rashness was pinching his muscles, turning him wild and desperate.

She had hardened herself against him and the solid thrust of her contempt was an unscalable barrier between them.

Reed's gun canted upward in his fist. He felt it buck solidly against his wrist, saw the red froth crawl from the bore.

Nothing says "fast-action western" like stuff crawling out of guns. I might charitably assume that Heckelmann wrote this in a hurry and for a quick payday, but that's not the sort of western novel Signet was trying to sell with its ambitious blurbs. I might not be so hard on Heckelmann if his paperback publisher hadn't told me to expect something better -- not only something better written but something more mature, more researched, more authentically colorful. The sort of western novels Signet describes actually did exist at this time, but Lawless Range just isn't one of them.
Posted by Samuel Wilson at 7:02 PM