RANCH ROMANCES: "Why don't you want to live, Joe?" 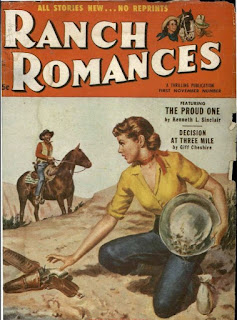 H. A. DeRosso is considered one of the darker authors of that mid-century period when western fiction, mirroring western movies, took on a more "adult" tone. He published his first pulp story in 1941; his last, posthumously published western stories appeared in Ranch Romances. DeRosso turned up frequently there, Ranch Romances being a market that probably ever western writer tried for. He also appeared at least once in Popular Publications' sweeter, gentler rival publication, Rangeland Romances, which tells me that DeRosso knew how to tailor his style to particular markets. How much did his stuff have to be tailored to Ranch Romances? "The Gun Rider" (First November Number, 1955) suggests that it was simply a matter of adding a happy ending to a pretty grim tale. 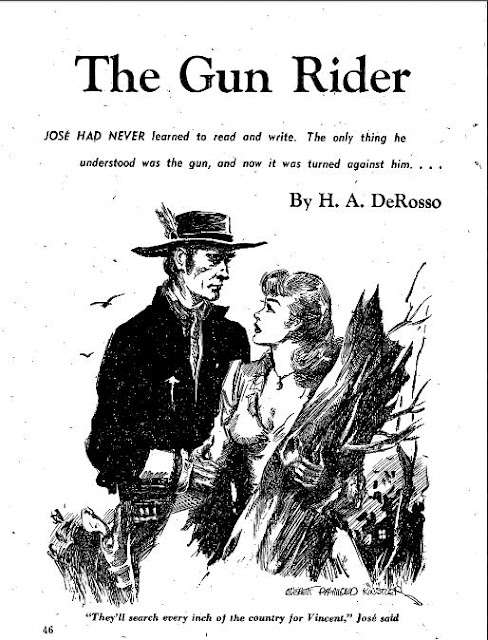 Jose Gomez, aka "Joe," is a hired gun for Senor Merriman, a corrupt rancher who dominates Dona Luz County with the votes of a Mexican community he keeps poor, ignorant and dependent. Merriman has sent Jose to his home town of San Onofre to hunt down Paul Vincent, a newspaperman making trouble with his investigative journalism. Jose finds himself a pariah, despised as a murderer even by his own mother, even though he claims to kill only in defense of Senor Merriman. The only sympathetic person in town is Erin Day, the pretty Anglo schoolteacher who's had a crush on Jose since they met. She tries to set "Joe" straight about Merriman by showing him the exposes Vincent has published, only to discover that Jose, to his own shame, can read neither English nor Spanish. To his further shame, he discovers that his own mother had been harboring Vincent, and so have most of the townspeople. He tries to cover up for her when Merriman and his bigoted sheriff show up in San Onofre, only to be warned that he can be framed for murder, for a killing that had saved Merriman's life, if he doesn't find the newsman. Finding his own situation increasingly hopeless, he helps Vincent get out of town by shooting two of Merriman's men and prepares for his own death. He figures Merriman has an airtight frame set up, and he figures that Erin, whom he'd pined for silently, thinking himself unfit for her, loves Vincent. Erin isn't so sure about that last part. She urges Jose to leave town until Vincent can clear his name and ruin Merriman, and despairs when he stays in San Onofre. "Why don't you want to live?" she asks, and while he says it's because the frame-up makes flight pointless, she figures out that he means to sacrifice himself, the big dummy, so she can go off with Vincent. "I know now why you helped Paul, why you came back, why you don't want to live," she says, "But I want you to." But she runs out of time to convince him to leave.

She began to cry softly.
"Please don't cry, Erin. Don't let me remember you the last time crying."
Outside Crabtree shouted, "Cobarde. Hijo de puto. Come on out, greaser."
"I'll do my best, Erin. I know how to use a gun good and I'll do my best. Tell my mother --" He did not finish.
"Tell her what, Joe?"
"Nothing."
He wanted to tell Erin good-bye but there was something too final in the words. They choked in his throat. So he touched her head again, the golden hair, and then he was throwing the door open and running out.


Maybe in a different magazine, or in something published a few years earlier Jose does get killed, and Erin does go off with Paul Vincent. Here, he kills his men, gasps "Erin, querida, Erin" with "what he was sure would be his last breath," and then wakes up in bed, recovering from his wounds. Erin will not only marry him, but will teach him to read and write. "Something filled his eyes, something like tears," DeRosso writes, "and he could not understand this because he had never been happy." But he's happy now. Despite that, it isn't quite prime Ranch Romances stuff. Erin's no action woman like you got on the covers so often, and DeRosso, in an effort to differentiate Jose speaking Spanish to his mother and other villagers and English to Erin, renders most of his hero's dialogue in that stilted fashion -- no contractions, no slang -- that 20th century writers from Ernest Hemingway to Pearl S. Buck and on down used to convey foreigners speaking their native tongue. Still, DeRosso can definitely create a mood and does so here pretty effortlessly. Whether the end of his story contradicts its mood was really for its target audience to decide.

The unz.org scan of this issue of Ranch Romances breaks "The Gun Rider" into two parts." Start here and continue with this link to a typical bit of  S. Omar Barker doggerel. On a tangent, you'll notice at the end of the story a promo for Robert Cummings' (ghost-written?) review of the upcoming Randolph Scott-Angela Lansbury picture My Gun Commands. If you've never heard of such a film, that's because the Joseph H. Lewis film was renamed A Lawless Street at the time of its release.

Posted by Samuel Wilson at 4:12 PM