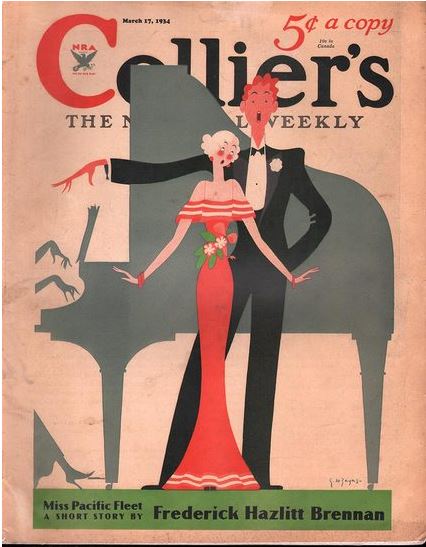 You might expect a St. Patrick's Day cover from The National Weekly on this date, but you didn't get it this year. Inside, however, you get some pulp alumni, starting with the ever-popular Ernest Haycox, found here in the middle of one of his occasional change-of-peace air-oriented serials. Edward L. McKenna, author of the boxing romance "Never A Champ," made his name at Adventure in the late 1920s but was a full-time slickster at this point. The star attraction this time, however, is Harold Lamb, who contributes "The Bear's Head" on that ever-popular theme of Vikings fighting American Indians. While this short piece, illustrated by John Richard Flanagan, has the romantic angle you'd expect from Collier's, in its brutal brevity it's arguably more purely pulp than much of the stuff Lamb wrote for actual pulps. Basically a Viking ship takes the wrong turn on the way to "the Green Land" and discovers an unknown country. Two warriors vie for the love of the captain's sister, but Brand's retirement from violence (after a brief, bloody career of globetrotting) puts him at a disadvantage against "Fighting Mord." Brand wanders off on his own in the new country, but when the rest of the party are overrun by angry natives, and Fighting Mord is slaughtered, our hero remembers his Berserk (not "Berserker," as in modern usage) heritage. The "savages" are terrified at first when their arrows bounce off Brand's mail shirt, but once they see him bleed they overpower him and, as savages will, prepare him for torture. Unfortunately, torture only makes Brand more angry.

...And suddenly one of the chiefs gave a shout and drew a knife. He stepped behind Brand and cut through the flesh between two of his ribs. Brand's [death] song ceased. The anger that was in him suddenly filled his brain. The snow and the yelling crowd became red before his eyes, and with the strength of frenzy, he jerked his bound wrists against his upturned knee. Some of the withes cracked and slipped. With his shoulder sinews cracking, the Berserk  tore his hands free from the bonds. He leaped forward through the air, knocking the savages aside. And before they could grasp him well he had caught up his axe where it lay unheeded on the ground.
Leaping away from them, he swung it about his head and the steel whined. The curved blade crashed into the face of a man, shearing away part of the skull. It split open the skull of another....


While some pulp graduates changed genre (or tried to eschew it) to appeal to a broader audience or aspire to literature, Lamb's subject matter remained fairly consistent whether he was writing for pulps or slicks. Stories like "The Bear's Head" prove that for all his "mainstream" success, Lamb definitely hadn't sold out in any way. You can start the story here, at unz.org, and resume it here and here. And you can sample the whole issue at this link.
Posted by Samuel Wilson at 3:55 PM