'All of Islam is running this way!' 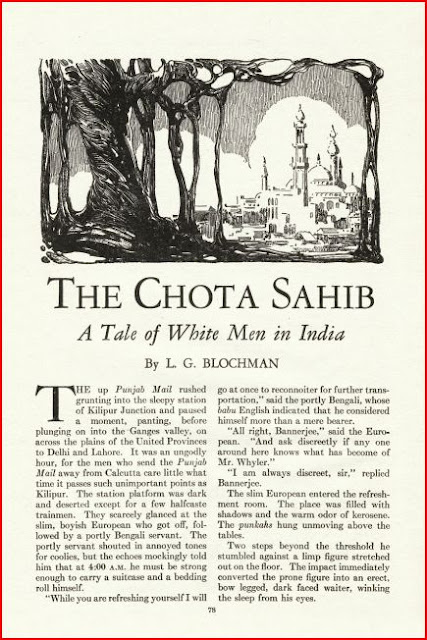 Lawrence G. Blochman took an aspiring pulpster's verion of the classical grand tour as a young man, writing his way around the world as a journalist for English-language papers in distant lands before settling down to write stories. He first appeared in Everybody's Magazine, which by the mid-1920s was pretty much a monthly version of Adventure. He made it into Adventure itself in 1929. "The Chota Sahib" (March 1, 1930) is only his second story for that magazine. As Blochman explains, the title denotes a "little" or "junior" white man in India, whether in the public or the private sector. Roy Spence is a chota sahib for Bengal Collieries, sent to Lalkand to help Sam Whyler, a hero of his who once saved his life, secure the rights to a coal seam found in a Shiite Muslim community. Blochman never uses the word "Shiite," but his description of a Moharram festival is the tipoff. Accompanied by a comic relief babu -- the gag is always that their syntax can't keep up with their English vocabulary -- Spence is an idealist, and this is a story of disillusionment. "There was a healthy glow to his cheeks," Blochman writes, "and an alert, candid light in his blue eyes. Something about him, some vague freshness, gave the impression that he had not been long in India." Pulpsters were believers in your face as a window to your essential character, and on the effects on character of intemperate climates like those of the Indian subcontinent. We will learn that they have done their dirty work on at least one burra sahib.

Reaching Lalkand, Spence finds Whyler grown fat and lazy. "His was not that extreme rotundity which gives an impression of frank good nature, but rather a careless corpulence," our young hero perceives. Despite his warnings that a rival company is sending agents to Lalkand, Whyler seems uninterested in the coal seam. He warns Spence not to bother negotiating until after the Moharram festival is over, and maybe not to bother negotiating at all, since the land Bengal Collieries wants is on "holy ground -- holy as hell. There's dozens of tombs of nigger saints on the property." Undeterred, Spence seeks an audience with the hajji who runs the local mosque and judges character much as pulp writers do. "You have honest eyes," he tells Spence, "Your face speaks the same message as your lips. Therefore honesty must cross your path." Spence gets the contract, only to have Whyler lose it, supposedly to a burglar. Luckily, Spence is fresh-minded enough to have a duplicate. Unfortunately, the village is suddenly out to kill all white man because some infidel has turned an unclean pig loose in the mosque. "All of Islam is running this way!" the panicky babu cries, urging Spence to make the hastiest of exits, but our hero is determined to rescue his hero, Whyler. Against all odds he finds the older man safe, only to discover that Whyler has sold him out, cutting a deal with the rival company's agent. His corruption complete, Whyler sneeringly tells Spence that he'd only rescued him back when because Spence was the boss's nephew and Whyler expected a promotion for his good dead. He put the pig in the mosque and kidnapped the hajji who knew the truth in the hope of getting the contract from Spence amid the confusion. "Young man, when you've been in India as long as I have, you'll know there aren't any pukkah sahibs," he says.

Making a desperate escape from his predicament, Spence goes a bit mad -- or at least Blochman writes him like a bit of a madman at the climax, when Whyler is shooting at him.

The youth clutched his gun. Something made him hesitate again. That something, Whyler, the hero. The man who saved his life. the ideal Whyler wanted to live ...
He blinked at a puff of flame. An explosion knocked him down. He had difficulty getting up. His left leg was numb.
Whyler was still standing there -- Whyler, the enemy. Whyler was shooting at him. The man wanted to kill -- not only him but the ideal Whyler. Spence had come to Lalkand to save the ideal Whyler. He would save him!
He squeezed the trigger.


And, of course, in his report to the company Spence credits Whyler with a heroic death in defense of Bengal Collieries. It's as if he needs to print the legend of a pukkah sahib -- a "perfect gentleman," more or less -- in order to deny Blochman's implicit truth that India ruins white men like Whyler. Whether Spence will go the same way is uncertain, but he does need a stiff drink before he sends the telegram. "The Chota Sahib" is the sort of story that's more interesting as a historical document of pop-culture attitudes toward India than for its literary qualities. The story may be bad in more than one sense, but it definitely isn't dull, and that's a point in its favor.
Posted by Samuel Wilson at 4:46 PM