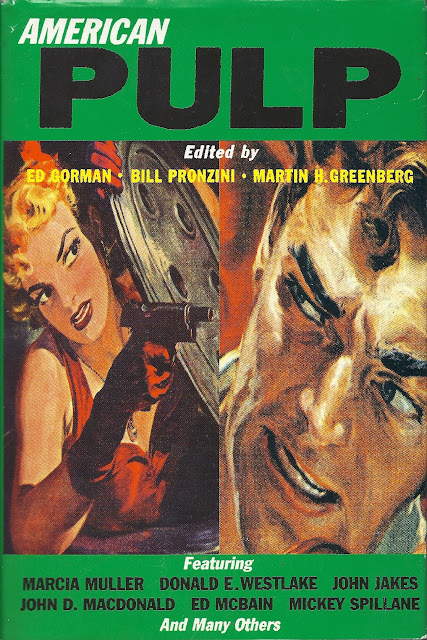 There's a pretty good used bookstore that's a five-minute walk from my home in Albany. They don't do paperbacks -- I suppose I should say "pocket books" or something that makes clear that they'll take trade paperbacks but not the small stuff -- but they have a great selection of literary fiction, criticism and historical writing catering to other tastes of mine. They have a crime fiction section that's always worth a look for used copies of trade-paperback reissues of classic stuff, as well as hardcover originals and anthologies. The book above is something I found today in the crime section. It's a 1997 collection of crime stories ranging from the 1930s to the 1990s, from a formidable selection of authors with a midcentury focus on the golden age of crime digests like Manhunt. It's a product of its moment in pop-culture history, just after Quentin Tarantino had effectively (if not unintentionally) changed the meaning of the word "pulp." For many people, "pulp" now meant "crime." As a result, as the editors report in their introduction, many curious people were disappointed upon discovering actual pulp magazines, since few resembled Pulp Fiction. Anthologists rushed to appease this market with this volume, the Mammoth Book of Pulp Fiction (which has a similar chronological and thematic focus) and Black Lizard's Big Book of Pulps (featuring stories from the actual pulp era, but still all in the crime genre). Don't get me wrong. I bought this book knowing what was in it because I love that noir-era fiction, and this collection may have the most formidable lineup ever of such authors -- including a sometime correspondent with this blog, James Reasoner. But I'd hate to think that after 20 years people still identify "pulp" with the matter or manner of Tarantino's instant classic when the word encompasses so much more than that. For me, Black Lizard's Big Book of Adventure Stories comes closer to the essence of pulp, and it's a shame that it couldn't identify it as such. I'd like to see more collections along those lines, and for that matter, am I the only one who thinks Black Lizard owes us a Big Book of Westerns instead of some of its more dubious recent publication choices? Or is that a question for another time? I had better answer my own question first. Is this pulp? I would say yes, despite the editors' own condescending attitude toward original pulp, which extends to a glaring typo that includes G-B and His Battle Aces in a list of magazine titles. I won't necessarily dispute their assertion that the digest era was the golden age of hard-boiled crime stories, and I'll certainly agree that the digests are direct descendants of pulp. To claim that the crime digests are the best of pulp, period, is another thing altogether and much more debatable. To publish a collection like this, however great it looks and however great it may prove to be, implies that the debate is over, when I think it's hardly begun.
Posted by Samuel Wilson at 6:00 PM