Not so old at that! 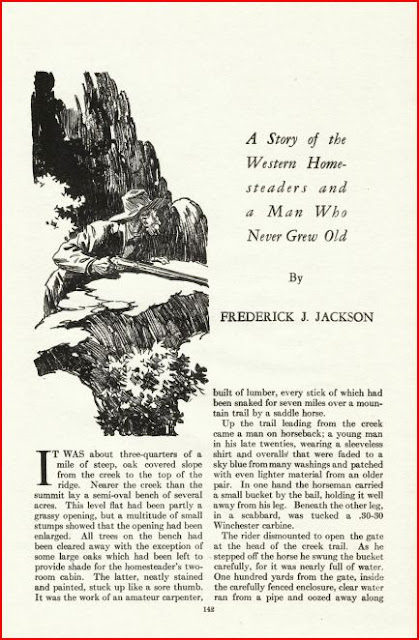 Frederick J. Jackson broke into the pulps way back in 1906 but didn't break into Adventure until 1922. In the latter stages of his pulp career -- he also wrote plays and screenplays, including the 1937 western Wells Fargo -- West was his primary market and Silvers Cassidy his recurring character. "Not So Old At That" (Adventure, March 1, 1930) is a comedy western, the sort of thing I normally avoid, but I couldn't help being charmed by the exuberant amorality of the protagonist. Newt Lucas, whose friskiness belies his 69 years, seems to have been a success at everything he's tried. In recent years he's settled into prosperous entrepreneurship, but he was a hellraiser in his heyday.

I'd git a little playful with my Colt in them days when I got a few days in me. The whole dang country was gitting so civilized that bimeby they began to issue warrants for me. Heh! They sent depity sheriffs to serve them warrants. I got me a whole collection of depity badges  and stars and guns and had the whole place looking like it had snowed because of the warrants I tore up.


Newt has come calling on his only living relative, a grand-niece, and found her husband Meredith, a beleaguered homesteader whose wife is in the hospital. Meredith has been victimized by the Moffitt clan that dominates his district and has resorted to chicanery to drive out the last few independent homesteaders. His sad story puts Newt in a "playful" mood, so the old man sets out to humble the Moffitts. His master plan plays out in three stages. First, he sends Meredith to the county seat to hire a lawyer and be seen by as many people as possible. At the same time, he invades Moffitt territory and shoots a bunch of their cattle, leaving sign that seems to implicate Meredith. Since the Moffitts know nothing about Newt, they can only assume that Meredith is attacking them. But when they swear out a warrant against the young man, they fall right into a perjury trap, instantly identifying Meredith as the man who shot their cattle and took pot shots at them, only to have respected citizens and public officials testify to seeing and talking with the defendant while all that was happening.  For the coup de grace, Newt plays con man, using one of his captured badges to convince the elder Moffitt that he's a federal officer who can offer them a deal to avoid prosecution by making concessions to Meredith and the other homesteaders. The truly funny thing about the story is that playful Newt Lucas is indisputably a sociopath, if thankfully not a homicidal maniac, who just happens to be on the side of good this time out. Jackson's story might remind you of a Bugs Bunny cartoon, as once Newt takes a side, the other side is hopelessly doomed to both injury and insult. Newt himself has something of Bugs' "Ain't I a stinker?" attitude, lamenting that "Them amateurs is so easy that there ain't no fun a-tall in foolin' them." And yet you shudder just a little when he muses that "He had had an unusual opportunity to 'git playful with the clan' -- as he had put it -- but felt that somehow or other he had cheated himself by not squeezing all the juice out of the opportunity he had held in his grasp." Were he not playing, Newt Lucas could be one scary man, whatever his age.
Posted by Samuel Wilson at 3:59 PM