'I never did see a bullfrog that had good sense.' 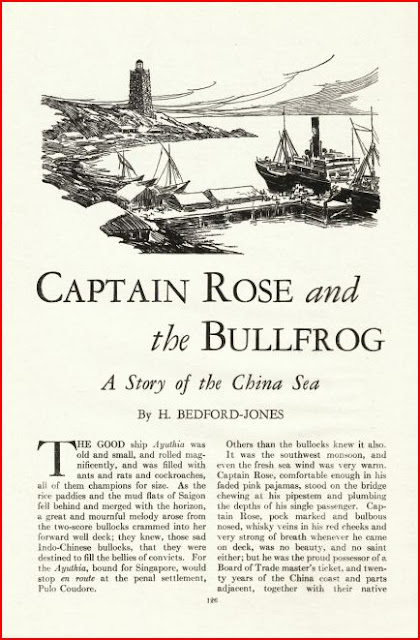 H. Bedford-Jones' "Captain Rose and the Bullfrog" (Adventure, March 1, 1930) is a study of the idiosyncratic ethics of an English sea captain, and perhaps a comment on English character. The title characters are the captain of the Ayuthia and his French mate, who approaches Rose with the proposition of liberating a Tonkinese convict from a French colonial prison. The mate hopes to win Rose's sympathy by explaining that the prisoner is a "deputy," one who agrees to serve the time for another man's crime in return for a handsome payout when he's free. In this particular case, the "deputy" has inherited some wealth and his family wants him free so he can claim it. Captain Rose does not sympathize. The deputy has made a bad bet, that's all, and on general principles breaking a convict out of prison is a form of "sneaking" that doesn't justify the risk of the captain's ticket. The mate finds this strange, knowing that Rose has been a smuggler when it suits him. That's lawbreaking just as much as springing a convict is, no?

"Were you never dishonest?" asked Hermant softly, looking at the horizon.
"No," said Captain Rose flatly, and removed his pipe to spit over the rail. "No! I've pulled a trick now and then, maybe a bit o' smuggling or worse, but plain crooked. Nothing dishonest; too much like sneakin', if you ask me."

"But you'd smuggle," said Hermant.
"That's different," said Captain Rose stoutly.
"How is it different? It's breaking the law."
"Huh! A fool parliament or governor or somebody says, 'Don't you dare do this or that, or we'll clap you in jail if we catch you at it. That's no law. That's a defiance. Like the liquor law in America. Makes a chap go do it, especially if he clears a bit o' money at it."
"But helping a poor devil get away to freedom, from a life sentence --"
"Is a sneakin' proposition," declared Captain Rose. "And if any chap came to me and made it flat out, I'd kick him in the pants. Yes, sir -- and take my fist to him, to boot!"

The mate carries out his plot anyway but Rose refuses to acquiesce. He suppresses the mutiny in bloody fashion, killing both the mate and the "deputy" in the process of vindicating his principles. His final verdict on the mate is, "I never did see a bullfrog that had good sense." To the modern reader Captain Rose may not seem the most principled man, but Bedford-Jones tells the story in a way that implies strongly that Englishmen like Rose --or, more generously, Anglo-Americans -- are the only people with principles, every other race, including other Europeans, being suspect. For all that, Bedford-Jones' portrait of the captain strikes me as all too plausible in the singlemindedness of his double standard, if that's what it is. Leaving character analysis aside, the story's a brisk bit of blood and thunder that won't disappoint those looking for such.
Posted by Samuel Wilson at 4:14 PM