The Violent World of RANCH ROMANCES

While Analog, a digest-sized magazine formerly known as Astounding Science Fiction, might fairly claim to be the last of the pulps, in a technical sense of the word that designation is usually reserved for a modest-sounding magazine called Ranch Romances. With apologies to Analog, Ranch Romance's record really is astounding. The pulp era ended in the 1950s, with most titles folding while a few (like Astounding) switched to a snazzier digest format. Ranch Romances, launched in 1924, continued until 1971. It was a reprints-only quarterly in its dotage, but it had continued to publish original fiction deep into the 1960s. When most pulps diminished in frequency to bimonthly or quarterly during the Fifties, Ranch Romances maintained a biweekly schedule until 1958.  But who cares about a romance pulp, right? Romance pulps are the bottom of posterity's barrel, offering none of the blood or thunder that defined pulp historically, or so we presume. But don't judge a pulp by its title. Take a look instead at the Ranch Romances collection at unz.org. It's a small sample of eleven issues, but most of them, fortunately, are from the 1950s when the Thrilling group published the magazine. I can't vouch for what it was like before Thrilling took over, but this is what it looked like in the summer of 1953. 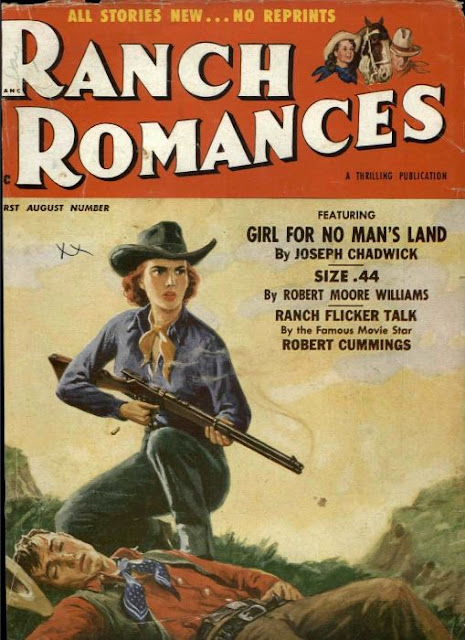 Nothin' says lovin' like gun-totin' wimmen. I don't know whether she's protecting that poor man or is just pausing before moving on to her next target. This cover is taken from the limited unz sample, but I could have taken almost any of unz's 1950s issues to make the same point, and they're pretty typical of the magazine throughout this era. Ranch Romances would have been all over The Pulp Calendar if it hadn't dated itself by "First August Number," etc. instead of using actual dates. So who's the primary audience for such stuff? The key to Ranch Romances' success probably was that it appealed to both sexes; to women who enjoyed just plain romance and/or the female empowerment promised on the covers; to men turned on by the action and/or the female empowerment promised on the covers.

Did the stories inside live up to the covers? I'll be taking a survey of the unz Ranch Romances holdings to find out, but the first story up for examination gives its heroine a handicap that keeps her from playing a dominant role like the cover lady does, but doesn't exactly leaver her helpless. 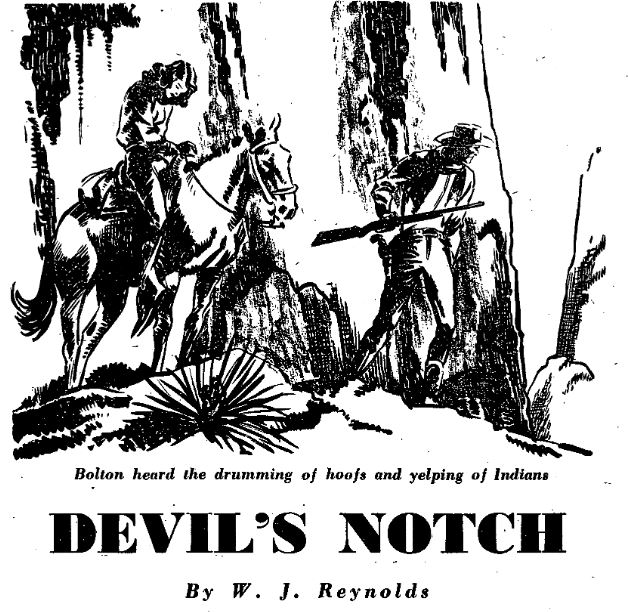 The heroine of W. J. Reynolds' "Devil's Notch" (First August Number, 1953) is discovered by Sheriff John Bolton sitting on a rock with a busted ankle. It's a self-inflicted injury, inflicted at the insistence of her outlaw step-brother, on the assumption that the sheriff, a chivalrous gentleman, will take her somewhere to be treated before resuming his pursuit. Not satisfied with Lily Conway's handiwork, Kid Permain went to work on her ankle himself with a rock. And just to be sure that the sheriff will be distracted, the Kid sets some fires to draw Indians down on Bolton and the girl. Once the sheriff realizes that Lily's not Permain's girlfriend, he thinks he may have a chance with her, if he can treat her ankle before she dies of blood poisoning. This story's idea of a bonding experience is his treatment of her swollen ankle with hot towels soaked in boiling water. She shows character by biting her lips after the first scream, in keeping with her stoic demeanor when Bolton first found her.

Eventually they cross paths with Permain, pursued by Indians. Handicapped by her ankle, Lily gets jumped by the outlaw while trying to hold him off with a pistol. "Permain yelled triumphantly, with the meaty sound of a fist meeting soft flesh," but Lily's not out for the count. As Bolton turns his attention to Permain and drops his revolver, fearing for the girl, the girl beans her step-brother with a rock. "She threw the fist-sized missile hard, as a man would throw it," Reynolds writes approvingly. A half-page fistfight ensues between outlaw and sheriff, until Permain dives for a gun on the ground and Lily throws another to Bolton. Bang bang bang bang. After the smoke clears, we get a standard romantic finish. How standard is it? I mean no reflection on W. J. Reynolds, from whom I'd read nothing before, but the fact is, there's little to distinguish "Devil's Notch" from stories that might appear in the other western titles Thrilling published in 1953, right down to the romantic finish. It may have been that most authors always had an eye on Ranch Romances as a market, or that most authors had their eye on a female readership that didn't buy just western romance pulps -- though there certainly were plenty of those to choose from back then. I expect to find some stories, and more likely the longer novelettes that are heavier on the love stuff, but fans of just plain westerns probably needn't be scared off by the Ranch Romances name. Trust what those covers show you, I dare say.
Posted by Samuel Wilson at 4:31 PM