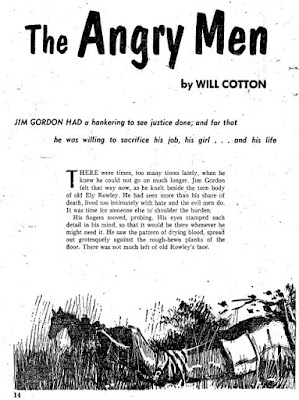 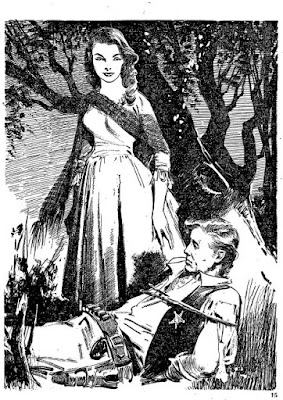 This ranch romance from the First May 1956 number begins with the hero discovering a suicide.

His eyes stamped every detail in his mind, so that it would be there whenever he might need it. He saw the pattern of drying blood, spread out grotesquely over the rough-hewn planks of the floor. There was not much left of Rowley's face.
"It's murder, Sheriff," someone said.


No one's disputing that Rowley shot himself, but most people in town feel that Ed Landry, the big storekeeper, drove his onetime competitor and present debtor to do it with sharp business practices. Sheriff Jim Gordon spends most of this novella trying to keep Landry from getting shot or lynched, but Landry hardly seems to deserve the lawman's solicitude. He lets Jim know that he's going to take over the bank that holds the mortgage on Jim's little spread, which will give him extra leverage on the sheriff.  Over the course of the story we'll learn that while Landry may be evil, he's not crooked. That is, it isn't him who's using violence to advance his interests. "He wanted money and power," the true villain of the piece explains, "but he didn't want it like I do....Folks thought he was hard, but it was mostly me that did his dirty work for him. And most of the time he didn't even know." Jim must expose this villain while rescuing Landry from the townspeople's misguided fury, and at the same time he has to choose between Landry's daughter Bethe and Jeannie Rae, whose brother tries to kill Landry. In short, it's the stuff of the typical western of the period, whether in pulp or paperback, with a few extra touches that make it a Ranch Romance. "It was a wild and exciting response that she stirred," Cotton writes of Jeannie, "a response that sent blood running hotly through him and made his heart pound crazily." The fact is, you probably could find a line like that in many a western that didn't bill itself as a romance. It came with the territory. Of the two women, it's Bethe who performs a feat worthy of a Ranch Romances cover heroine by snatching a gun from the villain's holster while his back is turned, but she's just a little too brazen for Jim's tastes, and she doesn't make his blood run as hot as the more stern Jeannie, who does get to hold a rifle on our hero for a while. He probably liked it.

Will Cotton was a latecomer to pulps in either sense of the term. He didn't publish his first story until 1951, when he was 39. He mostly wrote westerns but also did some detective stories as well as at least one novel in that genre, The Night Was Made For Murder. Nearly half his magazine output appeared in Ranch Romances, but that's understandable at a time when there were fewer and fewer alternatives for a short-form western writer. His last story for that mighty mag appeared in 1959, after it had shriveled from biweekly to quarterly. I found my first encounter with Cotton efficiently entertaining and relatively original in its refusal to make the greedy shopkeeper into the villain of the piece. "The Angry Men" and the First May 1956 issue are part of the unz.org trove, misidentified as a May 1954 issue. You can sample Cotton's story through this link.
Posted by Samuel Wilson at 4:11 PM